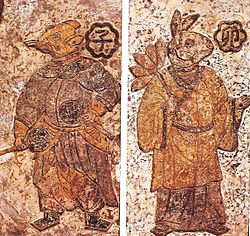 Chinese Mythology is a set of stories, beliefs, and gods originating from Ancient China.

Myths in China vary from culture to culture, the most common myths come from the Han culture. The current Chinese government recognizes fifty-six ethnic groups. Each group has their own language and mythology.

Chaos is a term used in several Chinese creation myths. This term is used to describe what existed before the earth and heavens. Every myth has a different description of Chaos and what came after.

One creation myth places the universe begging as an egg. Pangu was born in the middle of this egg, known as the Cosmic Egg. Within the egg, Pangu grew 10 feet everyday for 18,000 years. His body began to turn into different parts of the visible universe. His right eye becoming the moon, and his left the sun. People were finally created when the wind touched the bugs on his skin. This myth is the last and largest account of the creation from a lost text titled Historical Records of the Three Sovereign Divinities and the Five Gods.

Nü Gua is a goddess in another creation myth where the commoners, or peasants, were created by her dragging a cord through the mud. The rich and powerful people were created from yellow clay molded like an artist with statues.

Another creation myth takes place in the land of Hun-Tun, Chinese for "Center" or "Chaos"; the meeting place of Hu, the emperor of the Northern Sea, and Shu, the emperor of the Southern Sea. Hun-Tun lacked the ability to eat, see, hear, or breathe. To repay the kindness of Hun-Tun, Hu and Shu gave him the necessary bodily holes for eating, seeing, hearing, and breathing. The world began after seven days, one for each hole, following the death of Hun-Tun.

The three religions of China had great influence over the government and people of Ancient China.

Buddhism originated in India as a belief of rebirth or reincarnation. Being would be reborn in different forms based on the lessons they learned while alive. In order to escape the endless cycle, one must reach Nirvana or enlightenment. Reaching Nirvana is the ultimate goal of a Buddhist.

Buddhism is believed to be responsible for bringing the concept of hell to Taoism. Hell is a place where individuals must complete tasks to repay for the sins committed during their lifetime.

In the philosophy or religion of Confucianism, everyone must live a moral and humane life. It is essential for every person in a society to know their place in the world; be it Father, Ruler, Wife, etc.

Also known as Daoism, Taoism is a school of thought or religion. Taoism is credited with advancements in medicine and alchemy as the Taoist priests were responsible for healing people.

The Dao, or the "way", is an idea which existed before and after creation. The Dao cannot be seen or heard. A persons ultimate goal is to return to the Dao. It is known as the beginning and the end to Taoists.

Animism is the personification of natural forces as gods.

The Eight Immortals are not gods but ordinary men and women. They are rewarded immortality by the gods of Taoism for living according to the principals of Taoism.

The dragon is included in most Chinese myths as a symbol of strength, goodness, and the spirit of change. In ancient China, the original Dragon flew by magic instead of wings and had the body of a snake with the head of a horse. In the center of its forehead was a pearl.

The Buddhists are credited with making the dragon an evil creature. They were said to be filled with evil spirits.

The original story of the Chinese dragon has changed over time. The original dragon was a water god. The later myths told, had two types of dragons. The first were the old, friendly dragons. The second type were the evil winged dragons as originally told by the Buddhists.

All content from Kiddle encyclopedia articles (including the article images and facts) can be freely used under Attribution-ShareAlike license, unless stated otherwise. Cite this article:
Chinese mythology Facts for Kids. Kiddle Encyclopedia.