Minchinhampton is an ancient market town, located on a hilltop, 4 miles (6.4 km) south-south-east of Stroud, Gloucestershire, England, in the Cotswolds. 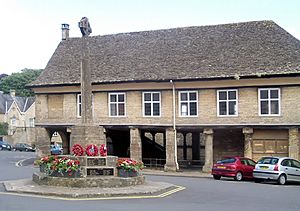 The town's shops are clustered in and around the High Street and comprise a general store, two hairdressers, a chain store, a ladies' boutique, a butcher's shop, a local organic dairy outlet, two restaurants, a cafe, a post office, an antiques shop, an estate agency and several charity shops.

The Crown Inn closed unexpectedly in March 2014. The pub had hosted clubs and societies, including a folk club and Probus over the years and its location on the Market Square meant that it was a focal point for the Minchinhampton Country Fayre, held every other year.

The main square has a War Memorial, and a 17th-century Market House, given to the town in 1919 by the Lord of the Manor Lt. Col. H. G. Ricardo and restored in 1944. A market is held every Thursday. There is a twice-yearly craft fair at Gatcombe, and a summer visit by Gifford's Circus every year.

The town has is also a doctors' surgery, library, dentist, school and youth club

Nearby is Minchinhampton Common, a Site of Special Scientific Interest. It offers an area of 580 acres (230 ha) for the recreation of walkers and golfers and is managed by the National Trust. The Common is also used as grazing land for the cows of local farmers in the summer. On the Common are long parallel ditches and mounds which formed part of a large Iron Age fort. There are outstanding views from the Common, west over the Severn estuary into Wales, and east to the Golden Valley and further into the Cotswolds.

Minchinhampton is close to the former Royal Air Force airfield, Aston Down, formerly a large employer in the area, now closed down and used for gliding. In 2005, following a Freedom of Information request, the local newspaper revealed that Aston Down is contaminated with arsenic, hydrocarbons and radium. Since the site is located above a vulnerable aquifer, local residents have formed a pressure group, the Aston Down Action Group, in an effort to persuade local government and central government agencies to implement more stringent safety regulations.

All content from Kiddle encyclopedia articles (including the article images and facts) can be freely used under Attribution-ShareAlike license, unless stated otherwise. Cite this article:
Minchinhampton Facts for Kids. Kiddle Encyclopedia.