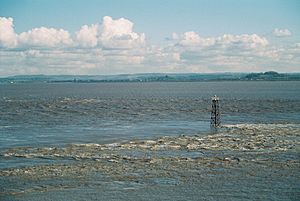 The Severn Estuary (Welsh: Aber Hafren) in Great Britain is the confluence of the River Severn, the River Wye, the River Usk, the River Avon, and other smaller rivers. Its high tidal range, approximately 50 feet (15 m), means that it has been at the centre of discussions in the UK regarding renewable energy.

Definitions of the limits of the Severn Estuary vary. A narrower definition adopted by some maps is that the river becomes the Severn Estuary after the Second Severn Crossing near Severn Beach, South Gloucestershire, and stretches to a line from Lavernock Point (south of Cardiff) to Sand Point near Weston-super-Mare. The definition used on Admiralty Chart SC1179 and the Bristol Channel and Severn Cruising Guide is that the estuary extends upstream to Aust, the site of the old Severn Bridge. The estuary is about 2 miles (3.2 km) wide at Aust, and about 9 miles (14 km) wide between Cardiff and Weston-super-Mare.

The Estuary forms the boundary between Wales and England in this stretch. On the northern side of the estuary are the Caldicot and Wentloog Levels which are on either side of the city of Newport; and, to the west, the city of Cardiff together with the resort of Penarth. On the southern, English, side, are Avonmouth, Portishead, Clevedon, and Weston-super-Mare. Denny Island is a small rocky island of 0.24 hectares (0.6 acres), with scrub vegetation, approximately three miles north of Portishead. Its rocky southern foreshore marks the boundary between England and Wales, but the island itself is reckoned administratively to Monmouthshire, Wales.

The estuary has one of the highest tidal ranges in the world — about 50 feet (15 m). The estuary's funnel shape, its tidal range and the underlying geology of rock, gravel and sand, produce strong tidal streams and high turbidity, giving the water a notably brown coloration.

West of the line between Lavernock Point and Sand Point is the Bristol Channel, which in turn discharges into the Celtic Sea and the wider Atlantic Ocean. The islands of Steep Holm and Flat Holm are located close to that line, in the middle of the estuary.

Sometimes the term Severn Estuary is used to include the tidal upstream stretch between Gloucester and Aust. During the highest tides on the upper reaches of this stretch, the rising water is funnelled up the estuary into the Severn bore, a self-reinforcing solitary wave that travels rapidly upstream against the river current.

Parts of the estuary have also been designated a Site of Special Scientific Interest. The SSSI includes most of the foreshore upstream from Cardiff and Brean Down and most of the upper estuary as far as Sharpness. The Upper Severn Estuary SSSI covers the tidal river between Purton and Frampton on Severn.

Both SSSI citations provide detail of the geological and biological interest and of particular note is the international importance for wintering and wading birds of passage, and of estuarine habits of outstanding ornithological significance. It is stated that the estuary supports over 10% of the British wintering population and is the single most important wintering ground for dunlin, and for significant numbers of Bewick's swans, European white-fronted geese and wigeon. Nationally important wintering populations are supported such as gadwall, shoveller and pochard.

There are notably seven species of migratory fish which pass through the estuary in both directions. These include significant numbers of Atlantic salmon and common eel. 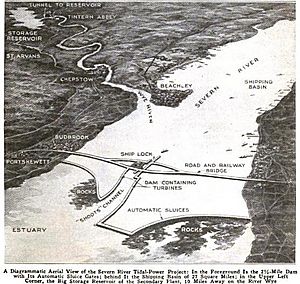 Diagram of a plan to harness tidal power on the River Severn circa 1921. Caption from Popular Mechanics Magazine 1921 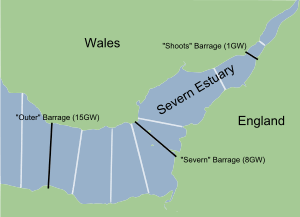 Barrage locations considered over the years

A huge tidal range and high level of surrounding industry and population have long made the Severn Estuary and Bristol Channel a focus for tidal energy schemes and ideas. Plans for a Severn Barrage — running 16 km (9.9 mi) across the Bristol Channel from Lavernock Point near to and south west of Cardiff to Brean Down near and just south west of Weston-super-Mare in Somerset — would generate a massive 8640 MW when the tide flows, and have been discussed for several decades now. The power generated would come from a lake of 185 square miles (479 km2) with a potential energy depth of 14 metres (46 ft). Tidal power only runs for around ten hours a day, but by using the enclosed lake as a reservoir of potential energy more hours of operation could be achieved. Other energy sources, such as wind and solar power, also create electricity at times that do not always match when it is needed. Excess power could be stored by pumping water uphill, as is already done at a variety of other installations in the UK.

The UK Government shelved the plans in the late 1980s due largely to cost issues and local environmental concerns. However, this was before recent huge rises in the price of energy, and before global warming had started to be taken seriously. In April 2006 the Welsh Assembly approved the idea of utilising the tidal power, but the RSPB has raised serious concerns about the effect on the mud flats, that have European Environmental protection status, and the UK government Energy Review published later in the year did not endorse the scheme.

Opinion is still divided on the benefits of a proposed barrage. John Hutton, Secretary of State for Business, Enterprise and Regulatory Reform, announced a further feasibility study on 25 September 2007. The Severn Tidal Power Feasibility Study was launched in January 2008 to assess all tidal range technologies (including barrages, lagoons and others). The study will look at the costs, benefits and impacts of a Severn tidal power scheme and will help Government decide whether it could or could not support such a scheme.

The Severn Estuary has the potential to generate more renewable electricity than all other UK estuaries. If harnessed, it could create up to 5% of the UK's electricity, contributing significantly to UK climate change goals as well as European Union renewable energy targets. The proposal for a hydro-electric barrier to generate 8.6 GW and meet five percent of Britain's power needs, is being opposed by some environmental groups.

The Severn Estuary Partnership (SEP) was set up in 1995 as an independent initiative to focus the activities of local government, statutory authorities and interested parties such as farmers and fisherman. Its stated aim is To bring together all those involved in the development, management and use of the Estuary within a framework which encourages the integration of their interests and responsibilities to achieve common objectives. In 2001 SEP published the Strategy for the Severn Estuary, which sets out a plan for the management of the estuary.

SEP uses a geographically extended definition of the Severn Estuary, beginning at the tidal limit of the River Severn in Gloucester and ending at a line drawn between Hurlestone Point near Minehead and Nash Point in the Vale of Glamorgan.

The archaeology of the Severn Estuary is richly varied and of considerable importance, reflecting both the varied nature of the topography and the importance of the river for both fishing and as a maritime waterway. The archaeological resource within the estuary is under threat from natural processes such as coastal erosion, exacerbated by the high tidal range and strong tidal currents, and from threats such as ongoing development pressure along the shoreline, marine aggregates extraction and new coastal defensive and realignment measures as well as proposed major infrastructure projects. An archaeological aerial survey report of the archaeology on the English side is available to view and download from the reference link.

All content from Kiddle encyclopedia articles (including the article images and facts) can be freely used under Attribution-ShareAlike license, unless stated otherwise. Cite this article:
Severn Estuary Facts for Kids. Kiddle Encyclopedia.