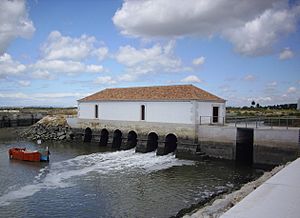 Tidal energy systems can extract either kinetic energy (energy caused by movement) from the moving water of rivers, tides and open ocean currents; or potential energy from the difference in height (or head) between high and low tides. The first method - generating energy from tidal currents - is becoming more popular because people believe that it does not harm the environment as much as barrages or dams. Many coastal sites worldwide are being examined to see if they can be used to produce tidal (current) energy. 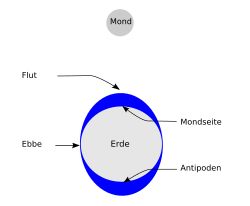 Schematic of the lunar portion of Earth's tides (exaggerated)

Like other hydroelectricity (electricity made using water), tidal power produces no pollution and is a renewable energy source, because tides are caused by events that happen in the solar system and so will not run out. Tidal power has great potential for future power and electricity generation because of the very large amount of energy contained in these rotational systems. Tidal power is reliably predictable (unlike wind power and solar power). In Europe, tide mills have been used for nearly 1,000 years, mainly for grinding grains. Modern tide mills provide tidal stream power.

Many things affect tides. The pull of the Moon is the largest effect, and most of the energy comes from the slowing of the Earth's spin.

All content from Kiddle encyclopedia articles (including the article images and facts) can be freely used under Attribution-ShareAlike license, unless stated otherwise. Cite this article:
Tidal energy Facts for Kids. Kiddle Encyclopedia.