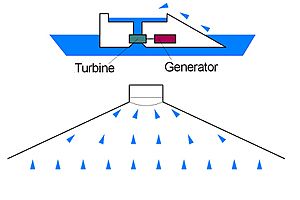 Wave power means the use of ocean surface waves and the capture of that energy to do useful work—including electricity generation, desalination, and the pumping of water (into reservoirs). It makes use of the kinetic energy of the waves that are driven by the wind.

Power from ocean surface wave motion might produce much more energy than tides. Tests have shown that it is possible to produce energy from waves, particularly in Scotland in the UK. But the technology is not as well developed as other renewable energy such as wind power or solar power.

All content from Kiddle encyclopedia articles (including the article images and facts) can be freely used under Attribution-ShareAlike license, unless stated otherwise. Cite this article:
Wave power Facts for Kids. Kiddle Encyclopedia.