Uphill Cliff is a 19.8 hectare biological Site of Special Scientific Interest near the village of Uphill, North Somerset, although it is in the Avon Area of Search used by English Nature which is based on the 1974-1996 county system. 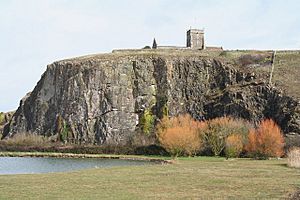 Uphill Cliff looking North East. At the top is the Old Church of St Nicholas

The site was notified as an SSSI in 1952 and the area increased in a 1984 Revision. The site excludes Uphill Church and grounds.

It consists of species-rich calcareous grassland and rock-face situated on Carboniferous Limestone. Steeper banks and knolls in the grassland have a flora which includes orchids Somerset Hair Grass (Koeleria vallesiana), and Honewort, (Trinia glauca) and the Goldilocks Aster (Galatella linosyris) along with several species of butterfly and Weevil (Curculionoidea).

All content from Kiddle encyclopedia articles (including the article images and facts) can be freely used under Attribution-ShareAlike license, unless stated otherwise. Cite this article:
Uphill Cliff Facts for Kids. Kiddle Encyclopedia.