Avonmouth is a port and outer suburb of Bristol, England, located on the Severn Estuary, at the mouth of the River Avon. The council ward of Avonmouth also includes Shirehampton and the western end of Lawrence Weston. 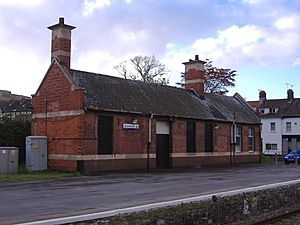 Historically in Gloucestershire, Avonmouth is located at the mouth of the River Avon, on its north bank and on the Severn Estuary. It is the location of a large port, Avonmouth Docks. The Royal Portbury Dock, under the same management, is on the other side of the Avon. Avonmouth is home to several large chemical manufacturing plants and the gas-fired Seabank Power Station. There are several light industrial and warehouse companies including Nisbets. There is also a significant residential area in Avonmouth between the industrialised zone and the M5 motorway. The M5 motorway runs through Avonmouth, and crosses the Avon by the Avonmouth Bridge. The M49 motorway runs between the M5 near Avonmouth and the M4 motorway at the Second Severn Crossing. The old Severn Bridge and the M48 motorway are linked to Avonmouth by the A403. The Welsh cities of Newport and Cardiff are both clearly visible from Avonmouth's coastline.

The Portway, part of the A4, connects Avonmouth to the centre of Bristol. Avonmouth is also served by a usually hourly train service to central Bristol from Avonmouth railway station on the Severn Beach Line.

A new deepsea container terminal is planned in Avonmouth.

A 10-hectare (25-acre) area of Avonmouth Sewage Treatment Works is managed as a nature reserve by Wessex Water. The man-made lagoons and a pool provide a feeding and resting area for many birds including ducks such as pochard, tufted duck, teal and shoveller. The rough grassland provides a refuge for voles, Northern crested newt and other small mammals, which are preyed upon by kestrels and barn owls.

All content from Kiddle encyclopedia articles (including the article images and facts) can be freely used under Attribution-ShareAlike license, unless stated otherwise. Cite this article:
Avonmouth Facts for Kids. Kiddle Encyclopedia.