Royal Society for the Protection of Birds facts for kids 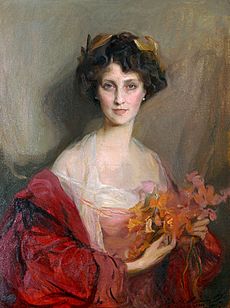 Winifred Cavendish-Bentinck, Duchess of Portland in 1912. She was the first and the longest-serving President of the RSPB

The Royal Society for the Protection of Birds (RSPB) is an organisation registered in Great Britain as a charity. It was founded as the Plumage League in 1889 by Emily Williamson.

The RSPB works to promote conservation and protection of birds and the wider environment. It runs public awareness campaigns and petitions, and it operates nature reserves throughout the United Kingdom.

The RSPB has 2,000 employees, 17,600 volunteers and more than a million members (including 150,000 youth members). It is the largest wildlife conservation charity in Europe. The RSPB has many local groups and maintains 200 nature reserves.

The group gained popularity and eventually amalgamated with the Fur and Feather League in Croydon to form the RSPB.

The original members of the RSPB were all women. They campaigned against the fashion of wearing exotic feathers in hats. To this end the Society had two simple rules:

At the time of founding, the trade in plumage for use in hats was very large: in the first quarter of 1884, almost 7,000 bird-of-paradise skins were being imported to Britain, along with 0.4 million birds from the West Indies and Brazil, and 0.36 million birds from British India.

The Society attracted support from some women of high social standing who belonged to the social classes that popularised the wearing of feathered hats, including the Duchess of Portland (who became the Society's first President) and the Ranee of Sarawak. The organisation began to attract the support of many other influential figures, both male and female, such as the ornithologist Professor Alfred Newton. The society received a Royal Charter in 1904 from Edward VII. It petitioned Parliament to introduce laws banning the use of plumage in clothing.

All content from Kiddle encyclopedia articles (including the article images and facts) can be freely used under Attribution-ShareAlike license, unless stated otherwise. Cite this article:
Royal Society for the Protection of Birds Facts for Kids. Kiddle Encyclopedia.