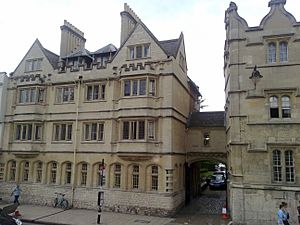 The current buildings of the college were begun in the 17th Century.

In 1979 The Univ started letting female undergraduate students study there.

All content from Kiddle encyclopedia articles (including the article images and facts) can be freely used under Attribution-ShareAlike license, unless stated otherwise. Cite this article:
University College, Oxford Facts for Kids. Kiddle Encyclopedia.