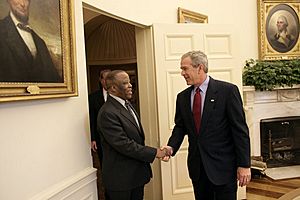 Festus Gontebanye Mogae (born 21 August 1939) is a Motswana politician. He served as President of Botswana from 1998 to 2008. He succeeded Quett Masire as President in 1998 and was reelected in October 2004. After being president for ten years, he stepped down in 2008 and was succeeded by Lieutenant General Ian Khama.

All content from Kiddle encyclopedia articles (including the article images and facts) can be freely used under Attribution-ShareAlike license, unless stated otherwise. Cite this article:
Festus Mogae Facts for Kids. Kiddle Encyclopedia.