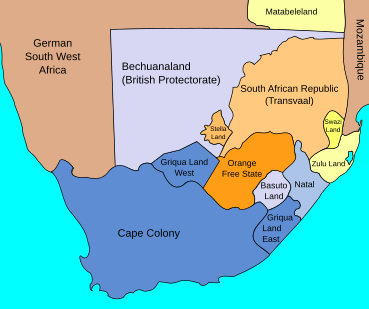 Political map of South Africa, in 1885

Bechuanaland was a British protectorate, on the territoryof modern-day Botswana. The porotectorate was created in 1835. Great Britain offered protection against the Boer Republics. It had a territory of approximately 582,000 square kilometres (225,000 sq mi). The capital was outside the country: It was the modern-day city of Mahikeng, then called Mafeking, in South Africa.

All content from Kiddle encyclopedia articles (including the article images and facts) can be freely used under Attribution-ShareAlike license, unless stated otherwise. Cite this article:
Bechuanaland Facts for Kids. Kiddle Encyclopedia.