Chelsea Victoria Clinton for NBC News from 2011 to 2014 and now works with the Clinton Foundation and Clinton Global Initiative. Since 2011, she has taken on a prominent role at the foundation and has a seat on its board.

Clinton was born in Little Rock, Arkansas, during her father's first term as governor. She attended public schools there until he was elected President and the family moved to the White House, where she began attending the private Sidwell Friends School. She received an undergraduate degree at Stanford University and later earned master's degrees from University College, Oxford and Columbia University's Mailman School of Public Health, and a Doctor of Philosophy in international relations from the University of Oxford in 2014. Clinton married investment banker Marc Mezvinsky in 2010. They have a daughter and a son.

Clinton has worked for NBC, McKinsey & Company, Avenue Capital Group, and New York University and serves on several boards, including those of the School of American Ballet, Clinton Foundation, Clinton Global Initiative, Common Sense Media, Weill Cornell Medical College and IAC/InterActiveCorp. In 2007 and 2008, Clinton campaigned extensively on American college campuses for her mother's unsuccessful Democratic presidential nomination bid and introduced her at both the 2008 and 2016 Democratic National Conventions.

Clinton was born in Little Rock, Arkansas, on February 27, 1980. Chelsea's name was inspired by a visit to the Chelsea neighborhood of London during a Christmas 1978 vacation. Hillary said that upon hearing the 1969 Judy Collins recording of the Joni Mitchell song, "Chelsea Morning", Bill remarked, "If we ever have a daughter, her name should be Chelsea."

When Chelsea was two years old, she accompanied her parents as they campaigned throughout Arkansas for her father's gubernatorial race. She learned to read and write at a very young age. Chelsea claims that she started reading the newspaper by the age of three and also wrote a letter to President Ronald Reagan when she was only five years old. In the letter, which was photocopied and preserved by her father, she asked President Reagan not to visit a military cemetery in West Germany, where Nazi soldiers were buried. Chelsea attended Forest Park Elementary School, Booker Arts and Science Magnet Elementary School and Horace Mann Junior High School, both Little Rock public schools. She skipped the third grade. 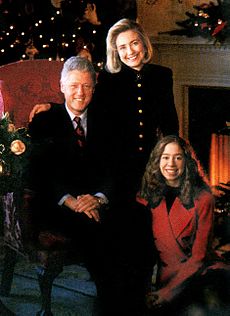 On January 20, 1993, the day of her father's first inauguration, Chelsea moved into the White House with her parents and was given the Secret Service codename "Energy". The Clintons wanted their daughter to have a normal childhood, and they hoped to shield her from the media spotlight.

Hillary Clinton followed the advice of Jacqueline Kennedy Onassis on raising children in the White House, and asked the press to limit coverage of Chelsea to her participation in public events such as state visits. Margaret Truman, daughter of former president Harry S. Truman, supported the Clintons, and in March 1993 wrote a letter to the editor of The New York Times about the damage that could be done if the press made Chelsea a subject of intense coverage.

Following Chelsea's high school graduation, media speculation regarding her choice of college resulted in heavy press coverage. She ultimately chose to attend Stanford University. During her father's eight years in office, there were 32 stories in The New York Times and 87 network news stories about Chelsea. Of all presidential children preceding her, she received the most television coverage. 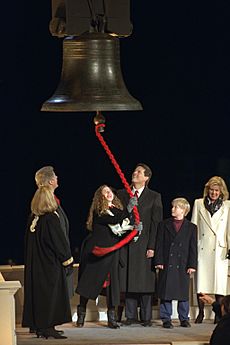 Although her father is a Southern Baptist, Clinton was raised in her mother's Methodist faith. She attended Foundry United Methodist Church on 16th Street, NW in Washington and met with other teens on Sunday mornings to examine questions of faith, philosophy, and issues of concern to her age group. Her parents joined her at the youth group's parent-teen round tables. An adult group leader thought Clinton to be "a terrific kid" and observed that she was treated as an equal in the group. Away from church, her social activities included visits to a Planet Hollywood restaurant with friends and sleep-overs in and out of the White House. President Clinton sometimes joined her and her sleep-over friends for breakfast.

At age four, Clinton had begun taking dance classes in Arkansas, and she continued her dance training at the Washington School of Ballet for several years. In her book, It Takes a Village, Hillary wrote that Bill was disappointed when Chelsea quit softball and soccer to concentrate on ballet, but he was nonetheless supportive, regularly attending her performances. She was cast in the role of the Favorite Aunt in the 1993 Washington Ballet production of Tchaikovsky's The Nutcracker. 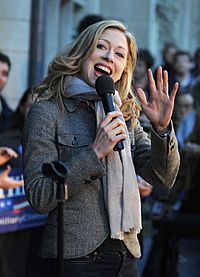 Clinton obtained a B.A. degree in history, with highest honors, at Stanford in 2001. The topic of her 167-page senior thesis was the 1998 Good Friday Agreement in Northern Ireland, advised by Jack Rakove. At the time of Chelsea's graduation, President Clinton issued a statement saying, "Hillary and I are grateful for the friendships and great learning experiences Chelsea had at Stanford, and we are very proud of her on this special day."

In July 2001, President Clinton revealed that Chelsea would be pursuing a master's degree at University College of the University of Oxford later that year – the same college where he studied politics between 1968 and 1970 on a Rhodes Scholarship; Chelsea did not apply for a Rhodes Scholarship. Lord Butler of Brockwell, the Master of University College, said: "Her record at Stanford shows that she is a very well-qualified and able student. The college is also pleased to extend its link with the Clinton family." Upon the recommendation of British and American advisers, the university implemented security measures, and fellow students were asked not to discuss her with the press.

In 2003, Clinton completed an MPhil degree in international relations at Oxford. Her 132-page thesis was titled The Global Fund to Fight AIDS, TB and Malaria: A Response to Global Threats, a Part of a Global Future, supervised by Jennifer Welsh and Ngaire Woods. Following her graduation, she returned to the United States.

In 2011, Clinton transferred back to University College, Oxford, from the Wagner School of Public Service at New York University to complete her DPhil degree in International Relations. She stated this was to be under her preferred doctoral advisor, Ngaire Woods. She finished her dissertation from New York City where she resides and was awarded the degree in May 2014. Her 712-page dissertation was titled The Global Fund: An Experiment in Global Governance.

In the spring of 2010, Clinton completed a M.P.H. degree at the Mailman School of Public Health of Columbia University and she began teaching graduate classes there in 2012.

In 2003, Clinton joined the consulting firm McKinsey & Company in New York City, and she went to work for Avenue Capital Group in late 2006. She served as co-chair for a fund-raising week for the Clinton Foundation, and subsequently became Vice Chair for the foundation. She serves on the board of the School of American Ballet and on IAC's board of directors.

In November 2011, NBC announced that they had hired Clinton as a special correspondent. One of her roles was reporting feature stories about "Making a Difference" for NBC Nightly News and Rock Center with Brian Williams. It was a three-month contract and allowed her to concurrently continue working for the Clinton Foundation and pursue her education. Clinton's first appearance was on the December 12, 2011, episode of Rock Center. Although she received some negative critical reviews for her work, Clinton's contract with NBC was renewed in February 2012. Rock Center ended in May 2013, and she left the network in August 2014. Clinton reportedly earned an annual salary of $600,000 for her work at NBC.

In April 2015, Clinton participated as a speaker on Voices in Leadership, an original Harvard T.H. Chan School of Public Health webcast series, in a discussion titled, "Addressing Challenging Global and Domestic Health Problems," moderated by Dr. Atul Gawande. In September 2015, Clinton made her authorial debut with It's Your World: Get Informed, Get Inspired and Get Going!, which was published by Philomel Books. The 400-page book is aimed at middle school students (ages 10 to 14) and introduces them to a range of social issues, encouraging them to take action to make the world a better place. The Today Show gave Clinton a full segment in which to discuss the book with her former colleagues at NBC. The book received mixed reviews from critics, who lauded Clinton for her effort but "lament[ed] its didactic tone". 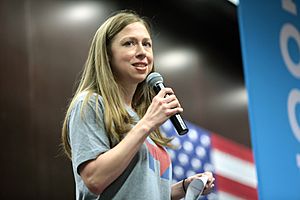 Clinton speaking at a campaign rally for her mother in the 2016 presidential election.

Since 2011, Clinton has taken a prominent role at the family's Bill, Hillary & Chelsea Clinton Foundation, and has had a seat on its board. As part of her work, she gives paid speeches to raise money with her fees going directly to the foundation, whose goals relate to improving global health, creating opportunities for women, and promoting economic growth. A spokesperson for the foundation told The New York Times in 2014 that her speeches "are on behalf of the Clinton Foundation, and 100 percent of the fees are remitted directly to the foundation".

On July 31, 2010, Clinton and investment banker Marc Mezvinsky were married in an interfaith ceremony in Rhinebeck, New York; she is Methodist and he is Jewish. Mezvinsky is the son of former members of Congress Marjorie Margolies-Mezvinsky and Edward Mezvinsky, and was raised in the Conservative Jewish tradition. The senior Clintons and Mezvinskys were friends in the 1990s and their children met on a Renaissance Weekend retreat in Hilton Head Island, South Carolina. They first were reported to be a couple in 2005, and became engaged over Thanksgiving weekend in 2009.

Clinton is portrayed in the film Beavis and Butt-Head Do America, where Butt-Head flirts with her; she responds by tossing him out of a window. In Zenon: Girl of the 21st Century, a Disney Channel Original Movie set in the year 2049, Clinton is the President of the United States. This joke was also made in an episode of Clarissa Explains It All.

Chelsea Clinton appeared in a Sesame Street skit with Elmo, advocating the importance of reading to young children.

All content from Kiddle encyclopedia articles (including the article images and facts) can be freely used under Attribution-ShareAlike license, unless stated otherwise. Cite this article:
Chelsea Clinton Facts for Kids. Kiddle Encyclopedia.