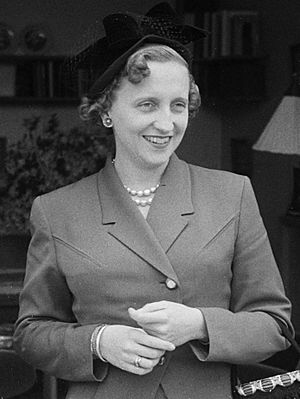 Mary Margaret Truman Daniel (February 17, 1924 – January 29, 2008) was an American singer, writer, and historian. She wrote many mystery/historical books. She was the daughter of U.S. President Harry S. Truman and Bess Truman.

Truman was born on February 17, 1924 in Independence, Missouri. She studied at George Washington University. Truman was married to Clifton Daniel from 1956 until his death in 2000. They had four children. Truman died on January 29, 2008 in her son's home in Chicago, Illinois from an respiratory infection, aged 83.

All content from Kiddle encyclopedia articles (including the article images and facts) can be freely used under Attribution-ShareAlike license, unless stated otherwise. Cite this article:
Margaret Truman Facts for Kids. Kiddle Encyclopedia.