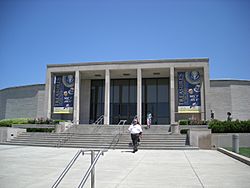 The main building, pictured in July 2007.

The Harry S. Truman Presidential Library and Museum is the presidential library to honor and remember President of the United States Harry S. Truman. The library was started in 1957. It is on a hill facing U.S. Route 24 in Independence, Missouri.

All content from Kiddle encyclopedia articles (including the article images and facts) can be freely used under Attribution-ShareAlike license, unless stated otherwise. Cite this article:
Harry S. Truman Presidential Library and Museum Facts for Kids. Kiddle Encyclopedia.