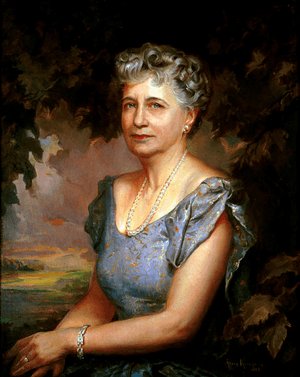 Her birthplace was Independence, Missouri, and her birth name was Elizabeth Virginia. Her parents were Margaret ("Madge") Gates and David Wallace. Her nickname was "Bessie." Harry Truman’s family came to live in Independence, Missouri in 1890. Elizabeth Virginia and Harry Truman attended the same school from fifth grade through high school. Once Truman remembered her childhood days, and described her as a girl with “golden curls” and “the most beautiful blue eyes.”

After completing her schooling, she studied in Miss Barstow's Finishing School for Girls in Kansas City, Missouri. Her father died in 1903. She returned to Independence, Missouri to live with her mother.

By the outbreak of the First World War, Harry S Truman had become a Lieutenant. He proposed to her and she accepted. After their engagement, Lieutenant Truman left for the battlefields of France in 1918. After the War ended, they married on June 28, 1919. In 1924, their only daughter, Margaret Truman, was born. Before that she had many miscarriages.

When Harry Truman became the President of the United States, Truman took the role of the First Lady. But, she felt the absence of privacy in the White House. She continued to attend to social functions, but to a minimum level.

Sometimes, people compare her with Eleanor Roosevelt, who was the First Lady before her. Mrs. Roosevelt was very active in press. But, Mrs. Truman did give only one press conference. She got the questions in advance. Her replies were written replies. When one reporter asked her whether she wanted her daughter, Margaret, to become President. Her reply was: "most definitely not". To a question, she replied that after her husband’s retirement as President, she wanted to "return to Independence". However, once she had thought of living in Washington after 1953.

After the President retired, the Truman couple returned to Independence, Missouri, in 1953. Truman spent his time building his library. In 1959, Mrs. Truman underwent an operation. In 1972, her husband died. Mrs Truman continued to live a quiet and private life. Her daughter and son-in-law, Clifton Daniel, and their four sons, often visited her.

She died in 1982. She lies buried beside her husband in the courtyard of Harry S Truman Library. She lived up to the age of 97 years, and at the time of her death, she was the longest-lived First Lady of the United States, setting a record, which still stands today.

All content from Kiddle encyclopedia articles (including the article images and facts) can be freely used under Attribution-ShareAlike license, unless stated otherwise. Cite this article:
Bess Truman Facts for Kids. Kiddle Encyclopedia.