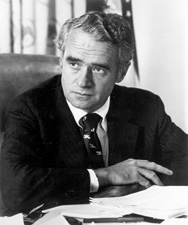 Eagleton was born in St. Louis, Missouri. He studied at Harvard Law School and at Amherst College.

Eagleton was a running mate for George McGovern during the 1972 United States presidential campaign. However, Eagleton soon withdrew from the ticker after Robert Boyd reported that Eagleton suffered from psychiatric problems and undergone three shock treatments.

Eagleton then ran for President of the United States in 1984, but lost the primary to Walter Mondale.

All content from Kiddle encyclopedia articles (including the article images and facts) can be freely used under Attribution-ShareAlike license, unless stated otherwise. Cite this article:
Thomas Eagleton Facts for Kids. Kiddle Encyclopedia.