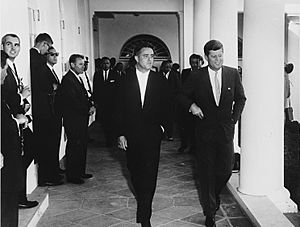 Shriver and JFK at the White House in August 1961.

He was also a Vice President nominee with presidential nominee George McGovern in 1972, they lost to Richard Nixon and to Spiro Agnew. He was also an activist.

Shriver was born in Westminster, Maryland on November 9, 1915 and was educated at Yale University and at Yale Law School. He had served in the army during World War II from 1941 through 1945 and was awarded a Purple Heart for his wounds during the war. 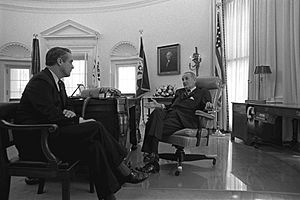 Shriver meeting with President Lyndon B. Johnson at the Oval Office, 1964

Shriver was awarded the Pacem in Terris Peace and Freedom Award in 1967. It was named after a 1963 encyclical letter by Pope John XXIII that calls upon all people of good will to secure peace among all nations. Pacem in terris is Latin for 'Peace on Earth'.

Shriver served as U.S. Ambassador to France from 1968 to 1970, becoming a quasi-celebrity among the French for bringing what Time magazine called "a rare and welcome panache" to the normally sedate world of international diplomacy.

In 2003 Shriver was diagnosed with Alzheimer's disease and has began to loose his memory and could not even name his own wife because of the disease. His daughter Maria Shriver wrote a children's book based on the disease.

On January 18, 2011 Sargent Shriver died in Bethesda, Maryland from Alzheimer's disease, he was 95 years old. He is buried next to his wife at the St. Francis Xavier Cemetery.

All content from Kiddle encyclopedia articles (including the article images and facts) can be freely used under Attribution-ShareAlike license, unless stated otherwise. Cite this article:
Sargent Shriver Facts for Kids. Kiddle Encyclopedia.