He was a leading member of the Democratic Party and of the Irish Catholic community. President Franklin D. Roosevelt appointed Kennedy to be the first chairman of the U.S. Securities and Exchange Commission (SEC), and he later directed the Maritime Commission. Kennedy served as the United States Ambassador to the United Kingdom from 1938 until late 1940, when he annoyed Roosevelt by his pessimism about Britain's survival. 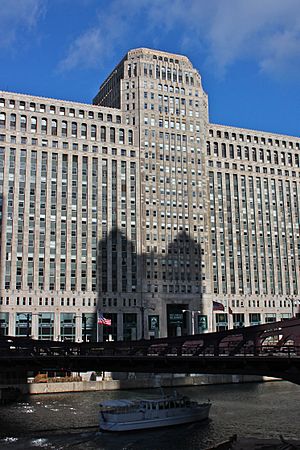 The Merchandise Mart. When it opened in 1930 it was the largest building in the world. At a brief point, the building was so large, it had its own zip code

Kennedy was born to a political family in East Boston, Massachusetts. He embarked on a career in business and investing. He first made a large fortune as a stock market and commodity investor. Kennedy later rolled over his profits by investing in real estate and a wide range of business industries across the United States. During World War I, he was an assistant general manager of a Boston area Bethlehem Steel shipyard, through which he developed a friendship with Franklin D. Roosevelt, who was the Assistant Secretary of the Navy. In the 1920s, Kennedy made huge profits by reorganizing and refinancing several Hollywood studios.

Kennedy grew his fortune with distribution rights for Scotch whisky. His company, Somerset Importers, became the exclusive American agent for Gordon's Gin and Dewar's Scotch. He owned the largest office building in the country, Chicago's Merchandise Mart, which gave his family an important base in that city and an alliance with the Irish-American political leadership there.

Kennedy's term as ambassador and his political ambitions ended during the Battle of Britain in November 1940. In later years, he worked behind the scenes to continue building the financial and political fortunes of the Kennedy family. After a disabling stroke in 1961, during his son's presidency, Kennedy developed aphasia and lost all power of speech but remained mentally intact. He was confined to a wheelchair until his death in 1969. 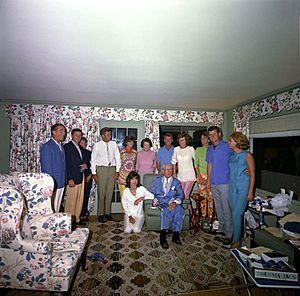 Joseph Kennedy and family celebrate his birthday in Hyannis Port 1963

All content from Kiddle encyclopedia articles (including the article images and facts) can be freely used under Attribution-ShareAlike license, unless stated otherwise. Cite this article:
Joseph P. Kennedy, Sr. Facts for Kids. Kiddle Encyclopedia.