Patricia Helen "Pat" Kennedy Lawford (May 6, 1924 – September 17, 2006) was an American socialite and the sixth of nine children of Rose and Joseph P. Kennedy, Sr.. She was a sister of President John F. Kennedy, Senator Robert F. Kennedy, and longtime Senator Ted Kennedy. She was married to actor Peter Lawford from 1954 to 1966.

She was born in Brookline, Massachusetts. She was the sixth of nine children born to Rose (nee Fitzgerald) and Joseph P. Kennedy, Sr..

She met English actor Peter Lawford through her sister Eunice in the 1940s. They met again in 1949, and again in 1953. They courted briefly and officially announced their engagement in February 1954. They married on April 24, 1954, at the Roman Catholic Church of St. Thomas More in New York City, twelve days before her thirtieth birthday. They settled in Santa Monica, California, and often socialized with actress Judy Garland and her family. Garland gave birth to her son Joseph at the same hospital and on the same day Kennedy gave birth to her son Christopher.

The couple had four children, all born in Santa Monica, California: 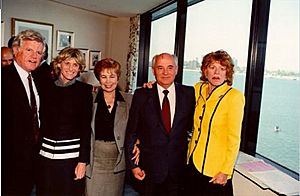 After her divorce, Kennedy battled alcoholism and suffered from tongue cancer. She worked with the John F. Kennedy Library and Museum, as well as with the National Center on Addiction, and was a founder of the National Committee for the Literary Arts, for which she arranged a series of author lectures and scholarships.

Lawford died at her Manhattan home from pneumonia at the age of 82. She was survived by her four children and ten grandchildren, as well as, at the time, her sisters Eunice and Jean, and her brother Ted.

All content from Kiddle encyclopedia articles (including the article images and facts) can be freely used under Attribution-ShareAlike license, unless stated otherwise. Cite this article:
Patricia Kennedy Lawford Facts for Kids. Kiddle Encyclopedia.