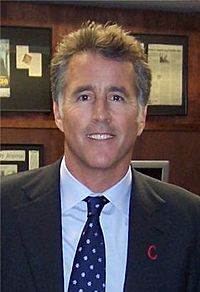 Christopher Kennedy "Chris" Lawford (March 29, 1955 – September 4, 2018) was an American writer, actor, producer and political activist. He was a member of the Kennedy family. He was the son of actor Peter Lawford and Patricia Kennedy Lawford. Lawford was born in Santa Monica, California.

Lawford was known for his roles in Terminator 3: Rise of the Machines, Thirteen Days, and General Hospital.

Lawford died of a heart attack on the night of September 4, 2018 in Los Angeles at the age of 63.

All content from Kiddle encyclopedia articles (including the article images and facts) can be freely used under Attribution-ShareAlike license, unless stated otherwise. Cite this article:
Christopher Lawford Facts for Kids. Kiddle Encyclopedia.