The Hasty Pudding Institute of 1770 is a social club for Harvard students.

The society was founded on September 1, 1795, by Horace Binney, who was then 15, by calling together a meeting of 21 juniors in the room of Nymphas Hatch. The club is named for hasty pudding, a traditional American dish that the founding members ate at their first meeting. Each week two members in alphabetical order had to provide a pot of hasty pudding for the club to enjoy.

It is the oldest collegiate social club in America. Originally, the club engaged in holding mock trials, which became more elaborate over time. This culminated in a member, Lemuel Hayward, secretly planning to stage a musical on the night he was to host the club's meeting. On December 13, 1844, Hayward and other members staged Bombastes Furioso in room 11 of Hollis Hall which began the Hasty Pudding Theatricals. 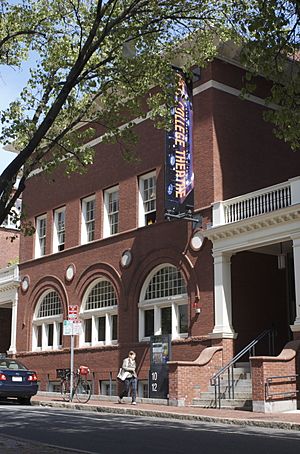 The Hasty Pudding Club is currently the only social club on campus that is coed and has members from all four years. Membership in the club is gained through a series of lunches, cocktail parties, and other gatherings, which are referred to as the "punch process". The club holds its social activities in a clubhouse near Harvard Square. These include weekly Members' Nights, dinner and cocktail parties, as well as its elaborate theme parties, such as "Leather and Lace."

The current clubhouse contains multiple rooms with specific purposes. Among these rooms is "The Arena," which is a room with no windows or openings to the outside world. The Arena is designated as the club's game room.

All content from Kiddle encyclopedia articles (including the article images and facts) can be freely used under Attribution-ShareAlike license, unless stated otherwise. Cite this article:
Hasty Pudding Club Facts for Kids. Kiddle Encyclopedia.