Bethesda is an unincorporated, census-designated place in southern Montgomery County, Maryland, United States, located just northwest of Washington, D.C. It takes its name from a local church, the Bethesda Meeting House (1820, rebuilt 1849), which in turn took its name from Jerusalem's Pool of Bethesda. The National Institutes of Health main campus and the Walter Reed National Military Medical Center are in Bethesda, in addition to a number of corporate and government headquarters.

Bethesda is situated along a major thoroughfare that was originally the route of an ancient Native American trail. Henry Fleet, an English fur trader, was the first European to travel to the area, which he reached by sailing up the Potomac River. After staying for two years with the Piscataway tribe—either as a guest or prisoner—he returned to England, spoke of potential riches in fur and gold, and won funding for another North American expedition.

Most early settlers in Maryland were tenant farmers who paid their rent in tobacco. The extractive nature of tobacco farming meant that colonists continued to push farther north in search of fertile land, and in 1694 Henry Darnell surveyed a 710-acre area that became the first land grant in present-day Bethesda. Rural tobacco farming was the primary way of life in Bethesda throughout the 1700s; while the establishment of Washington, D.C. in 1790 deprived Montgomery County of Georgetown, its economic center, the event had little effect on the small farmers throughout Bethesda.

Between 1805 and 1821, the area of present-day Bethesda became a rural way station after development of a toll road, the Washington and Rockville Turnpike, which carried tobacco and other products between Georgetown and Rockville, and north to Frederick. A small settlement grew around a store and tollhouse along the turnpike. By 1862, the community was known as "Darcy's Store" after the owner of a local establishment, William E. Darcy. The settlement was renamed in 1871 by the new postmaster, Robert Franck, after the Bethesda Meeting House, a Presbyterian church built in 1820 on the present site of the Cemetery of the Bethesda Meeting House. The church burned in 1849 and was rebuilt the same year about 100 yards south at its present site.

Throughout most of the 19th century, Bethesda never developed beyond a small crossroads village, consisting of a post office, a blacksmith shop, a church and school, and a few houses and stores. It was not until the installation of a streetcar line in 1890 and the beginnings of suburbanization in the early 1900s that Bethesda began to grow in population. Until that time, dependence on proximity to rail lines insulated Bethesda from growth, even as surrounding communities located directly on these lines blossomed. The arrival of the personal automobile ended this dependency, and Bethesda planners grew the community with the newest transportation revolution in mind.

That war, and the expansion of government that it created, further fed the rapid expansion of Bethesda. Both the National Naval Medical Center (1940–42) and the NIH complex (1948) were built just to the north of the developing downtown. This, in turn, drew further government contractors, medical professionals, and other businesses to the area. In recent years, Bethesda has consolidated as the major urban core and employment center of southwestern Montgomery County. This recent growth has been significantly vigorous following the expansion of Metrorail with a station in Bethesda in 1984. Alan Kay built the Bethesda Metro Center over the Red line metro rail which opened up further commercial and residential development in the immediate vicinity.

The main commercial corridor that runs through Bethesda is Maryland Route 355 (known as Wisconsin Avenue in Bethesda and as Rockville Pike and Hungerford Drive in more northern communities), which, to the north, connects Bethesda with the communities of North Bethesda and Rockville, ending, after several name changes, in Frederick, Maryland. Toward the South, Rockville Pike becomes Wisconsin Avenue near the NIH Campus and continues beyond Bethesda through Chevy Chase, Friendship Heights and into Washington, D.C., ending in Georgetown.

The area commonly known as "Downtown Bethesda" is centered at the intersection of Wisconsin Avenue, Old Georgetown Road and East-West Highway. Other focal points of downtown Bethesda include the Woodmont Triangle, bordered by Old Georgetown Road (Maryland Route 187), Woodmont and Rugby Avenues, and the Bethesda Row, centered at the intersection of Woodmont Avenue and Bethesda Avenue. Much of the dense construction in that area followed the opening of the Bethesda station on the Red Line of the Washington Metro rapid transit system, also located at this intersection and the centerpiece of the Bethesda Metro Center development. The Medical Center Metro stop lies about 0.7 miles north of the Bethesda stop, Medical Center, which serves the NIH Campus, the Walter Reed National Military Medical Center, and the Uniformed Services University of the Health Sciences.

Bethesda is often associated with its neighboring communities, Potomac, Chevy Chase, Great Falls, Virginia, and McLean, Virginia, for their similar demographics. In April 2009, Forbes ranked Bethesda second on its list of "America's Most Livable Cities". In October 2009, based on education, income, health, and fitness, Total Beauty ranked Bethesda first on its list of the U.S.'s "Top 10 Hottest-Guy Cities." In 2009, Self magazine ranked Bethesda as the second healthiest place for women in the country, a year after ranking it number one. As of 2009, eight Pulitzer Prize winners live in Bethesda, as do several well-known political commentators (including George Will, David Brooks, and Thomas Friedman). In 2014, it placed first on both Forbes' list of America's most educated small towns and Time's list of top earning towns. 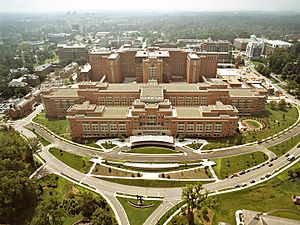 An aerial view of NIH in Bethesda, Maryland.

Important medical institutions located in Bethesda include the National Institutes of Health campus, Walter Reed National Military Medical Center, and the adjoining Uniformed Services University of the Health Sciences, as well as a number of other military medical and research institutions. Other federal institutions include the Consumer Product Safety Commission, and the Naval Surface Warfare Center Carderock Division. 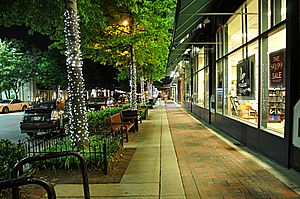 Federal Realty Investment Trust (FRIT) has developed much of the west side of downtown Bethesda into an area called Bethesda Row. The vibrant district includes Barnes & Noble, an Apple Store, a cinema, and dozens of shops and restaurants. Also located in downtown Bethesda is one of the Madonna of the Trail monuments, erected by the National Old Trails Association working in concert with the Daughters of the American Revolution. President Harry S Truman, presided over the dedication of the Bethesda monument, on April 19, 1929. Nearby is the Bethesda Post Office. Also starting in the heart of downtown Bethesda, is the Capital Crescent Trail which follows the old tracks of the B&O Railroad stretching from Georgetown, Washington, D.C., to Silver Spring, MD. Walter Reed Medical Center and the Bethesda Theater are two important Art Deco architectural structures in the suburbs surrounding Washington, D.C.

A number of ambassador residences are in Bethesda, including Bangladesh, Cape Verde, Guyana, Honduras, Lesotho, Morocco, Nicaragua, Uruguay, and Zimbabwe.

Long-distance buses include Vamoose Bus and Tripper Bus, both of which provide service from downtown Bethesda to the proximity of Penn Station in Midtown Manhattan, New York City.

Notable companies based in Bethesda include:

It is within Montgomery County Public Schools.

Private schools located in Bethesda include:

Bethesda is also home to a federally funded and operated health science university, the Uniformed Services University of the Health Sciences (USU). The primary mission of USU is to prepare graduates for service in the Medical Corps of the U.S. Army, Navy, Air Force, and Public Health Service. The university consists of the F. Edward Hebert School of Medicine, a medical school, and the Graduate School of Nursing, a nursing school. National Intelligence University is also in Bethesda.

The Washington Japanese Language School (WJLS, ワシントン日本語学校 Washington Nihongo Gakkō), a supplementary weekend Japanese school, holds its classes at the Stone Ridge School of the Sacred Heart in Bethesda. The WJLS maintains its school office in North Bethesda, adjacent to Garrett Park. The institution, giving supplemental education to Japanese-speaking children in the Washington, D.C. area, was founded in 1958, making it the oldest Japanese government-sponsored supplementary school in the U.S.

All content from Kiddle encyclopedia articles (including the article images and facts) can be freely used under Attribution-ShareAlike license, unless stated otherwise. Cite this article:
Bethesda, Maryland Facts for Kids. Kiddle Encyclopedia.