Kids Encyclopedia Facts
Not to be confused with Reza Shah, his grandfather.

Reza Pahlavi (Persian: رضا پهلوی; born 31 October 1960) is the oldest son of Mohammad Reza Pahlavi, the last Shah of Iran, and his wife Farah Diba. Prior to the Iranian Revolution in 1979, he was the crown prince and the last heir apparent to the throne of the Imperial State of Iran.

Pahlavi is the founder and leader of the self-styled National Council of Iran, an exiled opposition group, and is a prominent critic of Iran's Islamic Republic government. 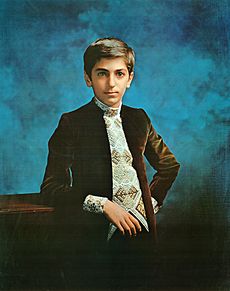 When he was born, the Shah pardoned 98 political prisoners and the government declared a 20% reduction in income tax. He studied at the eponymous "Reza Pahlavi School", a private school located in the royal palace and restricted to the imperial family and court associates. He was trained as a pilot; his first solo flight was at the age of 11, and he obtained his license a year later. He was a supporter of Taj Abadan football club.

As a cadet of the Imperial Iranian Air Force, he was sent to the United States in August 1978 to continue his pilot training, and was one of 43 cadet pilots in the one-year pilot training program at the former Reese Air Force Base, TX, which included flying the Cessna T-37 Tweet and Northrop T-38 Talon. As a result of the Iranian Revolution, he left the base in March 1979, about four months earlier than planned.

Pahlavi began studies at Williams College in September 1979, but dropped out in 1980. He then enrolled at The American University in Cairo as a political science student, but his attendance was irregular. In 1981, it was reported that he had dropped out of the program and continued his studies privately with Iranian professors, with a focus on Persian culture and history, Islamic philosophy, and oil in Iran.

Pahlavi obtained a BSc degree in political science by correspondence from the University of Southern California in 1985. He is fluent in English and French in addition to his native Persian.

Bob Woodward wrote in 1986 that the Reagan administration authorized the Central Intelligence Agency (CIA) to support and fund Iranian exiles, including Pahlavi. The agency transmitted his 11-minute speech during which he vowed "I will return" to Iranian television by pirating its frequency. The Tower Commission report, published in 1987, also acknowledged that the CIA was behind this event while a group in Paris calling itself 'Flag of Freedom' had taken responsibility for the act in September 1986.

James Mann wrote in February 1989 that when he asked the CIA about whether they help Pahlavi, they refused to comment and a spokesperson of the agency told him "We would not confirm nor deny an intelligence matter".

In 2006, Connie Bruck of The New Yorker wrote that "Pahlavi had CIA funding for a number of years in the eighties, but it ended after the Iran-Contra scandal". Andrew Friedman of Haverford College states that Pahlavi began cooperation with the CIA after he met director William J. Casey and received a monthly stipend, citing Pahlavi's financial advisor and other observers. Friedman also connects his residence in Great Falls, Virginia to its proximity to George Bush Center for Intelligence, headquarters of the service.

In 2009, Pahlavi denied receiving U.S. government aid or any foreign aid in an interview with The New York Times. Pahlavi said "No, no. I don't rely on any sources other than my own compatriots" and denied allegations of working with the CIA, calling the allegations "absolutely and unequivocally false". However, in 2017 he told Jon Gambrell of the Associated Press: "My focus right now is on liberating Iran, and I will find any means that I can, without compromising the national interests and independence, with anyone who is willing to give us a hand, whether it is the U.S. or the Saudis or the Israelis or whomever it is."

According to a People article published in 1978, Pahlavi dated a "blond, blue-eyed Swedish model he met in Rome". The same publication also reported that he lived with his girlfriend while living in Lubbock, Texas. As of 1980, he had an Egyptian girlfriend who was a student of The American University in Cairo, reportedly "closely guarded" by bodyguards.

In 2004, Pahlavi was named as the "unofficial godfather" of Princess Louise of Belgium, the eighth granddaughter of King Albert II of Belgium.

Noor Pahlavi (Persian: نور پهلوی , born 3 April 1992) is an American socialite, model, and real estate businesswoman. She is the oldest child of Reza Pahlavi and Yasmine Etemad-Amini. Born in exile after her family fled due to the Iranian Revolution, she was the first immediate family member of the Pahlavi dynasty to be born outside of Iran.

Pahlavi was born in exile on 3 April 1992 in Washington, D.C., to Reza Pahlavi and Yasmine Etemad-Amini. She was the first immediate family member of the Imperial family of Iran to be born outside of Iran, although her first cousin once removed, Patrick Ali Pahlavi, a descendant of a cadet line, was born in Paris in 1947. Her father is the last heir apparent of the defunct throne of the Imperial State of Iran and current head of the House of Pahlavi. Her paternal grandparents, Mohammad Reza Pahlavi and Farah Diba, were the last Emperor and Empress of Iran. She has two younger sisters: Iman and Farah. She attended The Bullis School in Potomac, Maryland, graduating in 2010. She graduated from Georgetown University in 2014 with a Bachelor of Arts degree in psychology. She subsequently graduated with an MBA from Columbia University, and works as an advisor to the non-profit impact investment fund Acumen.

Pahlavi was a keen football player and spectator. He was fan of the capital's football club Esteghlal, then known as Taj (lit. Crown) and his support was even televised by the National Iranian Radio and Television. The club performed in annual rallies organized on his birthday, which as a result identified the club with the Pahlavi's regime.

In 1981, UPI reported that Pahlavi attended the elite Gueziro Club in Cairo to watch tennis and was occasionally seen in discotheques at hotels in the vicinity of the Nile.

When interviewed about religion, Pahlavi said, "That's a private matter; but if you must know, I am, of course, by education and by conviction, a Shia Muslim. I am very much a man of faith." Iranian writer Reza Bayegan also notes that Crown Prince Reza is allegedly "deeply attached" to his Muslim faith. He has performed the Hajj (pilgrimage) to Mecca.

In 1989, The Washington Post reported that Pahlavi was unemployed. Asked about his sources of income, he replied that he had been financially supported by "friends and family" in the past seven years. In 2017, he told the Associated Press that since 1979 he had had no "side occupation" (with regard to political activities), adding that his money came from his family and "many Iranians who have supported the cause". According to a December 2018 news report by Politico, "he is thought to live mainly on what's left of his family wealth, his only full-time job being speaking out about Iran".

In 1990, Ali Haydar Shahbazi, a former Imperial Guard member who worked for Pahlavi as a longtime bodyguard filed a lawsuit in the district court of Alexandria, Virginia, accusing Pahlavi of breaching Iranian tradition by breaking his pledge to take care of him financially. Shahbazi, then aged 58, said in the court he abandoned more than $400,000 in property in Iran because Pahlavi assured him "I'm going to pay your expenses and everything. I'm going to take care of you better than my father [did]" when he was hired, and then fired him with a handshake and $9,000 in 1989. Shahbazi asked compensation for the $30,000 in taxes and penalties as well as an undetermined amount of money for his retirement. Pahlavi's attorney dismissed the claim, saying that Shahbazi has received gifts worth several thousand dollars and was allowed to live luxuriously in Pahlavi's house in Great Falls, Virginia, adding that the servant was fired because his client ran out of money. Pahlavi agreed that Shahbazi was a loyal friend but he offered support as long as he could. He also told the judge "I was not involved in the day-to-day handling of my financial affairs".

In 1991, District Judge Albert Vickers Bryan Jr. argued that Pahlavi "had little knowledge of how his estate's money was spent and could not be held personally accountable for employment agreements with servants", declaring the case dismissed. According to media reports, Pahlavi began to cry in the court when the judge threw out the case.

In 1990, Pahlavi and Ahmad Ali Massoud Ansari, his close aide and financial adviser, filed lawsuits against each other. Pahlavi accused Ansari of embezzlement amounting $24 million, while Ansari claimed $1.7 million lien against Pahlavi. During the trial, Pahlavi's attorney told the court "[d]ue to the demands of his political responsibilities and his lack of experience in financial matters, Pahlavi had to trust completely in Ansari for the management of his funds... over the years, no one supplanted Ansari in any way in Pahlavi's trust. Conversely, no one betrayed Pahlavi's trust any more than Ansari", going further to accuse Ansari as "an agent" for the Islamic Republic of Iran. Ansari denied the accusations and blamed Pahlavi for squandering the money with his extravagance, stating he faithfully carried out orders that Pahlavi was aware of.

The court asked Ansari to provide a complete accounting of his handling of the money, but he alleged that the documents have been destroyed to prevent a potential seizure. In 1996, the court ruled that Ansari should repay $7.3 million to Pahlavi and fined him an additional $2 million.

In November 2014, Pahlavi founded his own television and radio network called Ofogh Iran. In July 2017 it was reported that the Ofogh Iran International Media telethon no longer belongs to Reza Pahlavi.

All content from Kiddle encyclopedia articles (including the article images and facts) can be freely used under Attribution-ShareAlike license, unless stated otherwise. Cite this article:
Reza Pahlavi, Crown Prince of Iran Facts for Kids. Kiddle Encyclopedia.