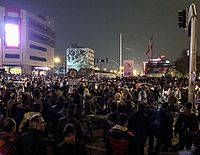 The protests seen in Tehran

The 2017–2018 Iranian protests were many public protests which happened in many cities throughout Iran beginning on 28 December 2017 and continuing into 2018.

The first protest took place in Mashhad, Iran's second-largest city by population. At first, they focused on the economic policies of the country; however, as protests spread throughout the country and soon protested the regime of Ali Khamenei.

According to The Washington Post, protesters' chants and attacks on government buildings and chanted "Death to the dictator!".

In a backlash against the protests, thousands of government supporters staged pro-government rallies in more than a dozen cities across Iran.

All content from Kiddle encyclopedia articles (including the article images and facts) can be freely used under Attribution-ShareAlike license, unless stated otherwise. Cite this article:
2017–2018 Iranian protests Facts for Kids. Kiddle Encyclopedia.