Julia Scarlett Elizabeth Louis-Dreyfus (born January 13, 1961) is an American actress, comedian, and producer. In television comedy, she is known for her work in Saturday Night Live (1982–1985), Seinfeld (1989–1998), The New Adventures of Old Christine (2006–2010), and Veep (2012–present). She is one of the most awarded actors in television history, winning more Emmy Awards and more Screen Actors Guild Awards than any other performer, eight of the Emmy awards were for acting, tying Cloris Leachman for the most acting Primetime Emmy wins; she has also received three Emmy awards for producing.

Louis-Dreyfus broke into comedy as a performer in The Practical Theatre Company in Chicago, Illinois, which led to her casting in the sketch show Saturday Night Live from 1982 to 1985. Her breakthrough came in 1989 with a nine-season run playing Elaine Benes on Seinfeld, one of the most critically and commercially successful sitcoms of all time. 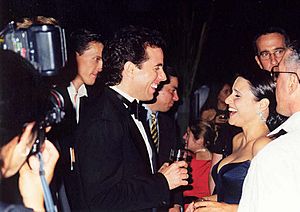 Jerry Seinfeld and Julia Louis-Dreyfus at the 1997 Emmy Awards

Louis-Dreyfus received a star on the Hollywood Walk of Fame in 2010, and was inducted into the Television Academy Hall of Fame in 2014. In 2016, Time named Louis-Dreyfus one of the 100 most influential people in the world on the annual Time 100 list. In 2018 it was announced she would be the recipient of the Mark Twain Prize for American Humor, presented by the Kennedy Center as America's highest comedy honor. 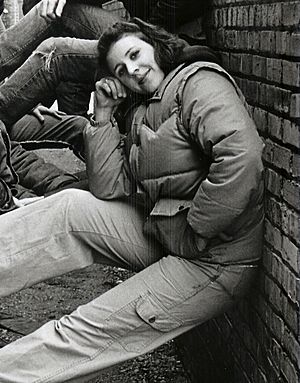 She is a great-great-granddaughter of Léopold Louis-Dreyfus, who in 1851 founded the Louis Dreyfus Group, a French commodities and shipping cmpany, which members of her family control into the 21st century. Her paternal grandfather, Pierre Louis-Dreyfus, was president of the Louis Dreyfus Group. Pierre was from an Alsatian Jewish family; he remained in France during World War II, fighting as a cavalry officer and later in the French Resistance. Her paternal grandmother was born in America, to parents from Brazil (of German descent) and Mexico; during the 1940s, she moved Julia's father to America from France.

In 1962, one year after Louis-Dreyfus's birth, her parents divorced. After relocating to Washington, D.C., when Julia was eight, her mother remarried. During her childhood, her mother occasionally took her to Unitarian church services.

Louis-Dreyfus spent her childhood in several states and countries, in connection with her stepfather's work with Project HOPE, including Vietnam, Colombia, and Tunisia. She graduated from the Holton-Arms School in Bethesda, Maryland in 1979.

Louis-Dreyfus attended Northwestern University in Evanston, Illinois. There, she was a member of the Delta Gamma sorority and studied theatre before dropping out to take a professional acting job. 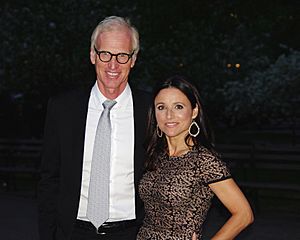 While at Northwestern, Louis-Dreyfus met future husband and Saturday Night Live comedian Brad Hall. She and Hall married in 1987. They have two sons together. In 2007, she was invited back to Northwestern to receive an honorary Doctor of Arts degree.

Louis-Dreyfus has stated that she holds much respect for "women who are not afraid of making themselves look bad or foolish to get a laugh", and cites her acting idols as Lucille Ball, Mary Tyler Moore, Madeline Kahn, Teri Garr, Valerie Harper, and Cloris Leachman. Actress Tina Fey has stated that Louis-Dreyfus served as inspiration for her character Liz Lemon on the award-winning NBC comedy series 30 Rock.

All content from Kiddle encyclopedia articles (including the article images and facts) can be freely used under Attribution-ShareAlike license, unless stated otherwise. Cite this article:
Julia Louis-Dreyfus Facts for Kids. Kiddle Encyclopedia.