Animal Farm is a 1999 British-American television film directed by John Stephenson and written by Alan Janes. Based on the 1945 novel of the same name by George Orwell, it stars Kelsey Grammer, Ian Holm, Julia Louis-Dreyfus, Patrick Stewart, Julia Ormond, Paul Scofield, Pete Postlethwaite and Peter Ustinov. In the film, a group of anthropomorphic animals successfully revolt against their own human owner, only to slide into a more brutal tyranny among themselves.

As a bleak scene unfolds, a group of animals are seen struggling through the mud during a thunderstorm as Jessie, an elderly Border collie (and the narrator of the story) reflects on the events that led them to their current situation. The film flashes back to the 1940s years earlier.

As the cruel and rarely sober farmer, Jones, struggles with debt to his fellow neighbor Pilkington, Old Major, the prize Middle White boar of Manor Farm, holds a meeting with all the animals in the barn. Major tells the animals that humanity is their enemy, for they serve and provide for mankind without reward. All the animals then start singing an anthem created by Major, but is interrupted when Jones hears the singing (all he hears is just animal noises), only for him to slip in mud while investigating the sound, accidentally firing his shotgun which indirectly hits Major, causing him to stagger backwards and fall to his death from the top of the barn. Jones would then later use Major for meat by cutting up his body into joints. That night, when Jones later neglects to feed the animals, Boxer, a strong and kind-hearted shire horse, leads the animals to the food shed, eventually resulting in the pigs leading a revolution against Mr. Jones.

Now under the rule of animals, Manor Farm is renamed "Animal Farm" by a young boar named Snowball. Snowball paints on the barn doors what he calls the Seven Commandments of "Animalism". Meanwhile, Napoleon, a Berkshire boar, takes away Jessie's newborn puppies from her so that he can raise them himself, claiming that it is best for them to receive an education from him. When confronted by the other animals about the disappearance of the farm's milk and apples, Snowball confesses that he and the other pigs have taken the milk and apples for themselves. Napoleon's loyal subordinate Squealer explains that the pigs' well-being takes priority because they are the brains of the farm. Jessie is the only one who is unconvinced. Having learned that Jones has lost control of his farm, Pilkington leads an invasion into Animal Farm with other local farm workers led by Frederick so they can claim the farm for themselves. Snowball has planned for such an invasion and successfully leads the animals to victory, causing the humans to retreat. Defeated, Pilkington considers working with the animals instead.

Snowball proposes that the animals build a windmill to improve their operations, but Napoleon opposes the plan. When the animals show support for Snowball, Napoleon summons Jessie's puppies, now fully grown dogs trained to become Napoleon's private army, to chase Snowball out of Animal Farm and leaving his fate unknown. Napoleon lies by declaring Snowball a "traitor and a criminal" and Squealer claims that the windmill was Napoleon's plan the whole time; leaving the animals unaware that Napoleon is evil and is, therefore, the real traitor, with Squealer secretly working as Napoleon's accomplice.

Napoleon declares that a "special committee of pigs will now decide all aspects of the farm" and the animals begin constructing the windmill with Boxer's help. When Pilkington begins to trade with the pigs, Boxer remembers Old Major mentioning that animals were not to engage in trade with humans, but Napoleon explains that "Animal Farm cannot exist in isolation". Napoleon has Old Major's skull placed in front of the barn to oversee the Farm's progress and has a statue of himself erected nearby. Jessie confesses to the other animals that she witnessed the pigs living in the farmhouse and sleeping in the beds. Squealer explains that no commandment has been broken. He had, in fact, "altered" the commandment, "No animal shall sleep in a bed", to "No animal shall sleep in a bed with sheets."

Jones and his wife sabotage Animal Farm by blowing up the almost-complete windmill with dynamite in which Napoleon frames Snowball for the sabotage. The pigs consume more food, leaving the other animals with little to eat. Napoleon declares that Snowball is causing the food shortage and that the hens will have to surrender their eggs to the market. When the hens oppose, Napoleon declares that the hens are all criminals and that no food will be given to them (and that any animal caught giving food to a hen will be punished by death). The pigs produce propaganda films using Jones' filming equipment. While celebrating Napoleon as a leader, the films show the deaths of animals that have broken Napoleon's rules. It is revealed that the commandment, "No animal shall kill any other animal", has been changed to "No animal shall kill any other animal without cause." The commandment, "No animal shall drink alcohol", is also changed to, "No animal shall drink alcohol to excess" after the pigs begin to buy whiskey from Pilkington.

After Boxer collapses from being overworked, Squealer informs Jessie that Napoleon will be sending Boxer to the hospital. However, Benjamin, a wise donkey, notices that the van that comes for Boxer is marked with the words "Horse Slaughterer and Glue Boiler", but Boxer is taken away to his death before the other animals can intervene. As Jessie and Benjamin plan to flee from Animal Farm, Napoleon is paid by Pilkington for selling Boxer to the glue factory in exchange for more whiskey, and Squealer's latest propaganda film assures the animals that the van was actually from the hospital, but had previously been the property of a horse slaughterer.

That night, Pilkington and his wife dine with the pigs in the farmhouse. While proposing a toast, Napoleon announces that the farm's name will revert back to its original name Manor Farm. Watching through a warped glass window, Jessie sees the faces of Pilkington and Napoleon distorted in such a way that she can't tell the difference between them, and Pilkington is overheard bragging to his wife that he made money selling second-rate farm equipment to Napoleon. Muriel the goat and Benjamin notice that the final commandment, "All animals are equal", has been extended to include "but some animals are more equal than others." Jessie, Muriel, Benjamin and a few other animals escape the farm before things can get any worse. Later, Napoleon is seen before a crowd of cheering animals, wearing Jones' clothes and standing upright on his hind legs. He declares that the farm will devote itself to making weapons and building walls for the protection of themselves and their way of life. He shouts that the revolution is over and all animals are now free.

The film returns to the present day, where Jessie and her companions return to find Manor Farm unattended and in ruins. Napoleon, Squealer, and all the other animals that remained in Manor Farm have died, but Jessie finds some dogs who had survived and realizes they are her own puppies. In response, the puppies recognize her as their mother. Jessie sees Napoleon's statue now collapsed, and remarks that she knew that one day, Napoleon's evil, cruelty, and greed would bring about his ruin.

Sometime later, a motorcar arrives with a benevolent farmer, his wife and children, the new owners of Manor Farm (although the whereabouts of Jones and his wife are unknown). Jessie remarks she will not let this family "make the same mistakes" of the neglect of Jones or the abuse of Napoleon, and is aware the small remnant of animals will now have to work alongside their new human masters to restore Manor Farm so they will finally be free at last.

Differences between the book and the film 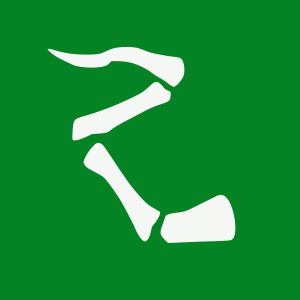 Hoof and Horn flag used in the film.

Second version of the flag seen at the end of the film.

All content from Kiddle encyclopedia articles (including the article images and facts) can be freely used under Attribution-ShareAlike license, unless stated otherwise. Cite this article:
Animal Farm (1999 film) Facts for Kids. Kiddle Encyclopedia.