The Tamworth, also known as Sandy Back and Tam, is a breed of domestic pig originating in its namesake Tamworth, Staffordshire United Kingdom, with input from Irish pigs. It is among the oldest of pig breeds, but as with many older breeds of livestock, it is not well suited to modern production methods and is listed as "Threatened" in the United States and "Vulnerable" in the UK by the Rare Breeds Survival Trust, as fewer than 300 registered breeding females remain. This animal is of ginger to red colouration and is thought to have descended from wild boars, via native pig stock of Europe. Principal populations today are in the United Kingdom, Australia, the United States, New Zealand, and Canada. 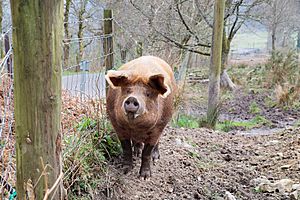 This breed exhibits an elongated head shape and a long, narrow body. The ears are erect and pointed, while the face has rectilinear lines as well as the snout. Colours range from a pale gingery to dark mahogany red. Early in the breed history, colours were orange and purple, but breeding has been conducted to remove the orange colouration. The bristle density protects their skin from ultraviolet harm from the sun; nevertheless, when they moult between June and August (in the Northern Hemisphere), shade is sought along with copious mud coating to prevent sunburn. The mud coating also provides a way for the pigs to cool down, as pigs cannot sweat.

Tamworths are considered a medium-sized porcine breed, with a full-grown boar ranging from 250 to 370 kg (550 to 820 lb) and the mature sow from 200 to 300 kg (440 to 660 lb). The adult length ranges from 100 to 140 cm (39 to 55 in) and heights of about 50 to 65 cm (20 to 26 in) are common. The curled adult tail is about 24 to 30 cm (9.4 to 12 in). This animal is characterised by having a neck and legs that are long, and by deep sides, but narrow backs. Its ham structures are quite muscular and firm. The breed is also known for having excellent foot structure and a good skeletal system. Litter sizes are typically somewhat smaller than commercial breeds. Unacceptable features according to breed aficionados are: curly hair, coarse mane, turned up nose, and dark spots on the coat.

The most salient feature of the Tamworth is its great hardiness with respect to adverse climates. Thus, the breed does well in its more northerly settings such as Scotland and Canada, where winters are severe, not only in regard to cold but also high winds. The animal is not only durable and rugged, but also is extremely well-suited for forest grazing, being able to thrive on bracken. Tamworths graze compatibly with cattle, being able to retrieve forage that cattle leave behind in the open pasture. This said, Tamworth pigs can be protective of their territories, thus somewhat aggressive towards any other livestock in the same pasture. This animal is very efficient at excavation while rooting for food in the forest or pasture. The breed is used in forage-based farming systems. The sows demonstrate good maternal skills, being consistent in suckling all littermates. Litters normally range in size from six to ten piglets. Piglets at birth are usually wild and wary of humans, but easily adjust to human interaction. Tamworths display a good disposition and enjoy the attention of humans.

The breed originated in Sir Robert Peel's Drayton Manor in Drayton Bassett almost next to the market town of Tamworth, Staffordshire where they were first sold, after the existing herd was interbred from 1812 with pigs from Ireland known as "Irish Grazers", that Peel had seen in Ireland in 1809. Much of the improvement took place locally in Staffordshire and in Warwickshire, Leicestershire, and Northamptonshire, all in England. The breed is little interbred with non-European breeds and close to original European forest swine.

In 1865, Tamworths achieved English breed recognition and in 1885 the herd book was started. Tamworths were imported into the United States by Thomas Bennett of Rossville, Illinois, in 1882. Soon they entered Canada where they have also endured. Breed associations for Tamworth swine are active in the UK, the USA, and Canada. Farmers in each country much favour other pigs in quantity. From 1913 to mid-century, the breed reached peak numbers in Canada, reaching up to 10% of total swine. In Australia, the breed reached peak numbers of about 1000 in the mid-20th century. Modern herds are near-minimal for a good guarantee of endurance in each of the five recognised countries holding these animals. 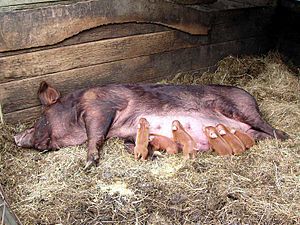 A Tamworth sow with her piglets

Being a breed considered quite distant genetically from most modern commercial swine, the Tamworth is considered an excellent choice for cross-breeding. It is sometimes called a "bacon pig" because of its ability to achieve high body mass without having much actual fat. As at 2018 breeding females number: USA (1000); United Kingdom (340); Canada (254); Australia (55), and New Zealand (40). The breeding societies in each country consider conservation the highest priority, with a great emphasis upon record-keeping.

All content from Kiddle encyclopedia articles (including the article images and facts) can be freely used under Attribution-ShareAlike license, unless stated otherwise. Cite this article:
Tamworth pig Facts for Kids. Kiddle Encyclopedia.