Alexander is best known for his role as George Costanza in the television series Seinfeld.

Alexander has had an active career on stage, appearing in several Broadway musicals including Jerome Robbins' Broadway in 1989, for which he won the Tony Award as Best Leading Actor in a Musical. He appeared in the Los Angeles production of The Producers. He was the Artistic Director of "Reprise! Broadway's Best in Los Angeles", where he has directed several musicals.

Alexander was born in Newark, New Jersey, the son of Jewish parents. Alexander grew up in Livingston, New Jersey, and is a 1977 graduate of Livingston High School. He attended Boston University but left the summer before his senior year, after getting work in the city of New York.

At Boston University, Alexander wanted to pursue classical acting, but a professor redirected him toward comedy after noticing his physique, remarking, "I know your heart and soul are Hamlet, but you will never play Hamlet." He was later given an honorary degree in 1995. He is a practicing magician, and only switched to acting as a career when he realized that he was unlikely to succeed as a magician. 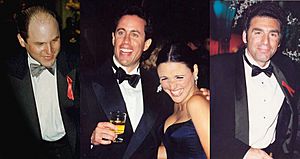 Alexander began his acting career on the New York stage and is an accomplished singer and dancer. He is best known as one of the key cast members of the award-winning television sitcom Seinfeld (1989–1998), in which he played George Costanza (Seinfeld's character's best friend since childhood).

Alexander was nominated for six (6) Primetime Emmy Awards and four (4) Golden Globe Awards for his performance as Costanza, but did not win any, mainly due to his co-star, Michael Richards being nominated and winning for his role as Cosmo Kramer. He did, however, win a Screen Actors Guild Award for Outstanding Performance by a Male Actor in a Comedy Series for his work.

Before Seinfeld, he starred in a commercial for John Deere and in a short-lived CBS sitcom called Everything's Relative in 1987 which lasted six episodes. Alexander voiced Catbert, the evil director of human resources, in the short-lived Dilbert animated series based on the popular comic strip. He has acted and voiced in many other series and movies since beginning his career. 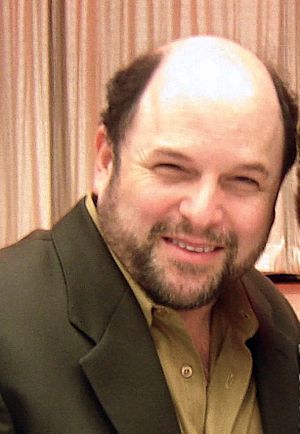 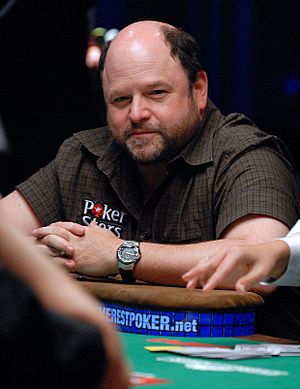 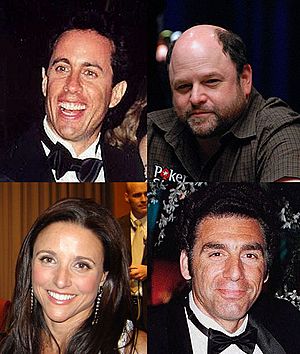 All content from Kiddle encyclopedia articles (including the article images and facts) can be freely used under Attribution-ShareAlike license, unless stated otherwise. Cite this article:
Jason Alexander Facts for Kids. Kiddle Encyclopedia.