John David Ashcroft (born May 9, 1942) is an American lawyer, lobbyist, songwriter and former politician who served as the 79th U.S. Attorney General (2001–2005), in the George W. Bush Administration. He later founded The Ashcroft Group, a Washington D.C. lobbying firm.

Ashcroft previously served as Attorney General of Missouri (1976–1985), and as the 50th Governor of Missouri (1985–1993), having been elected for two consecutive terms in succession (a historical first for a Republican candidate in the state), and he also served as a U.S. Senator from Missouri (1995–2001).

He had early appointments in Missouri state government.

He has written several books about politics and ethics. Since 2011 he sits on the board of directors for the private military company Academi (formerly Blackwater), has been a member of the Federalist Society, and is a professor at the Regent University School of Law, a conservative Christian institution affiliated with televangelist Pat Robertson.

His son, Jay Ashcroft, is also a politician, serving as Secretary of State of Missouri since January, 2017.

Ashcroft was born in Chicago, Illinois, the son of Grace P. (née Larsen) and James Robert Ashcroft. His father was a minister in an Assemblies of God congregation, served as president of Evangel University (1958–74), and jointly as President of Central Bible College (1958–63). He later served as president of Valley Forge Christian College. His mother was a housewife whose parents immigrated from Norway.

Ashcroft went to school in Springfield, Missouri. He attended Yale University, where he was a member of Sigma Tau Gamma and the St. Elmo Society, graduating in 1964. He received a Juris Doctor degree from the University of Chicago School of Law (1967).

During the Vietnam War, he received six student draft deferments and one occupational deferment because of his teaching work.

In 1972, Ashcroft ran for a Congressional seat in southwest Missouri in the Republican primary election, narrowly losing to Gene Taylor. After the primary, Missouri Governor Kit Bond appointed Ashcroft to the office of State Auditor, which Bond had vacated when he became Governor.

In 1974, Ashcroft was narrowly defeated for election to that post by Jackson County County Executive George W. Lehr, who argued that Ashcroft, who is not an accountant, was not qualified to be the State Auditor. 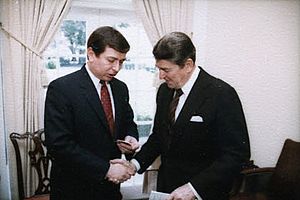 Ashcroft with President Ronald Reagan in 1984

Ashcroft was elected governor in 1984 and re-elected in 1988, becoming the first (and, to date, the only) Republican elected to two consecutive terms in Missouri history.

During his second term (1991-92), Ashcroft was the chairman of the National Governors Association.

In 1994 Ashcroft was elected to the U.S. Senate from Missouri, again succeeding a retiring John Danforth. Ashcroft won 60% of the vote against Democratic Congressman Alan Wheat.

In 1998, Ashcroft briefly considered running for U.S. President; but on January 5, 1999, he announced that he would not seek the presidency and would instead defend his Senate seat in the 2000 election.

In the Republican primary, Ashcroft defeated Marc Perkel. In the general election, Ashcroft faced a challenge from Governor Mel Carnahan. In the midst of a tight race, Carnahan died in an airplane crash two weeks prior to the election. Ashcroft suspended all campaigning after the plane crash in light of the tragedy. Carnahan's name remained on the ballot because of Missouri state election laws. Lieutenant Governor Roger Wilson became governor upon Carnahan's death. Wilson said that should Carnahan be elected, he would like to appoint his widow, Jean Carnahan, to serve in her husband's place; Mrs. Carnahan announced that, in accordance with what her husband would have wanted, she would serve in the Senate if he won the election. Following these developments, Ashcroft resumed campaigning.

In spite of his death, Mel Carnahan won the election 51% to 49%. No one had ever posthumously won election to the Senate.

Tom Ridge and John Ashcroft in 2004 in Washington, D.C.

In December 2000, following his Senatorial defeat, Ashcroft was chosen for the position of U.S. attorney general by president-elect George W. Bush who was impressed by Ashcroft. He was confirmed by the Senate by a vote of 58 to 42, with most Democratic senators voting against him, citing his prior opposition to using forced busing to achieve desegregation and opposition to Ashcroft's pro-life views.

After the September 11, 2001 attacks, Ashcroft was a key supporter of passage of the USA PATRIOT Act.

On November 9, 2004, following George W. Bush's re-election, Ashcroft announced his resignation, which took effect on February 3, 2005 when the Senate confirmed White House Counsel Alberto Gonzales as the next attorney general. His hand-written resignation letter, dated November 2, stated: "The objective of securing the safety of Americans from crime and terror has been achieved." 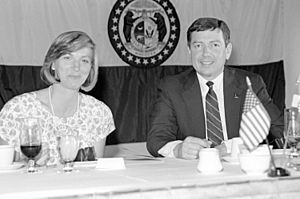 Ashcroft is a member of the Assemblies of God church. He is married to Janet E. Ashcroft and has three children with her. His son, Jay, is the Missouri Secretary of State.

Ashcroft had long enjoyed inspirational music and singing. In the 1970s, he recorded a gospel record entitled Truth: Volume One, Edition One, with the Missouri legislator Max Bacon, a Democrat.

Ashcroft was given an honorary doctorate before giving the commencement at Toccoa Falls College in 2018.

All content from Kiddle encyclopedia articles (including the article images and facts) can be freely used under Attribution-ShareAlike license, unless stated otherwise. Cite this article:
John Ashcroft Facts for Kids. Kiddle Encyclopedia.