Janet Wood Reno (July 21, 1938 – November 7, 2016) was an American lawyer who served as the Attorney General of the United States from 1993 until 2001. She was nominated by President Bill Clinton on February 11, 1993, and confirmed on March 11, 1993. She was the first woman to serve as Attorney General and the second-longest serving Attorney General in U.S. history, after William Wirt. 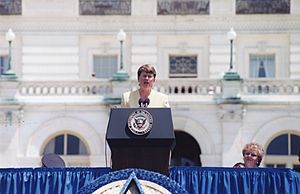 Reno was born in Miami, Florida. Reno's mother, Jane Wallace (née Wood), raised her children and then became an investigative reporter for The Miami News. Her father, Henry Olaf Reno (né Rasmussen), was an emigrant from Denmark and a reporter for the Miami Herald for 43 years. Janet Reno had three younger siblings. The family moved to property near the Everglades when Reno was 8 years old, living in a house Reno's mother built.

Reno attended public school in Miami-Dade County, Florida, where she was a debating champion, and was valedictorian at Coral Gables Senior High School. In 1956 she enrolled at Cornell University, where she majored in chemistry, became president of the Women's Self-Government Association, and earned her room and board. After graduating from Cornell, Reno enrolled at Harvard Law School, one of only 16 women in a class of 500 students. She graduated from Harvard in 1963.

Reno was diagnosed with Parkinson's disease in 1995, from which she died on November 7, 2016. She was surrounded by friends and family at the time of her passing.

All content from Kiddle encyclopedia articles (including the article images and facts) can be freely used under Attribution-ShareAlike license, unless stated otherwise. Cite this article:
Janet Reno Facts for Kids. Kiddle Encyclopedia.