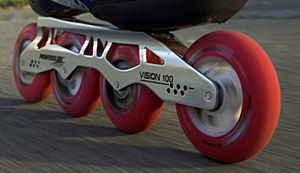 Inline skating is a kind of skating. It involves a person moving across land using shoes that have wheels on the bottom. It is similar to roller skating, except that the wheels are smaller and are in a single line. Inline skating is also called rollerblading, after the Rollerblade brand of skates. .

Inline skates usually have between 2 and 5 polyurethane wheels. These wheels are arranged in a single line. This allows for faster speeds than roller skates.

All content from Kiddle encyclopedia articles (including the article images and facts) can be freely used under Attribution-ShareAlike license, unless stated otherwise. Cite this article:
Inline skating Facts for Kids. Kiddle Encyclopedia.