Second Amendment to the United States Constitution facts for kids 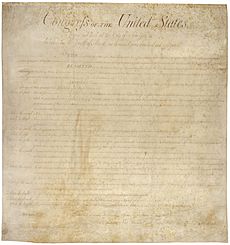 The Bill of Rights in the National Archives.

Close-up image of the Second Amendment 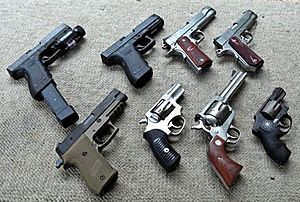 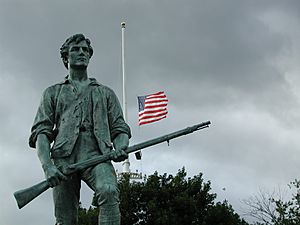 Ideals that helped to inspire the Second Amendment in part are symbolized by the minutemen.

Created on December 15, 1791, the Second Amendment to the United States Constitution is the part of the United States Bill of Rights that establishes the right of citizens to possess firearms for lawful purposes. It says, "A well regulated militia, being necessary to the security of a free state, the right of the people to keep and bear arms, shall not be infringed."

When America was being colonized by European countries, firearms were very important to colonists. When Europeans came to America, they brought with them the idea of land ownership by an individual. They received this right from their king through land grants. This was completely foreign to Native Americans who considered a particular territory belonged to the tribe. Colonists defended their claims against Native Americans and other Europeans whose kings may have granted them the same lands. They also needed firearms for hunting. In many towns and villages, men were required to own firearms for the defense of the community. Most colonists coming to America in the 17th century had no experience as soldiers. The British kept few soldiers in the colonies, and colonists soon found they needed to establish militias.

Colonies had militia laws that required every able-bodied man to be available for militia duty and to provide his own arms. In 1774 and 1775, the British government, which now had a larger presence, attempted to disarm American colonists. This caused the colonists to form private militias, independent of any control by the governors appointed by the British government. The Minutemen who fought the British Army at the Battles of Lexington and Concord were an independent militia.

After the American Revolutionary War, the framers of the Constitution, like most Americans of the time, distrusted standing (permanent) armies and trusted militias. After the Revolutionary War, Americans trusted state militias to defend the country. The Articles of Confederation, the new nation's first constitution, called for each state to maintain a well-armed militia. Congress could call up the militias to defend the country against any foreign power. However, Congress could only form a standing army if nine of the thirteen states approved. This was one of the weaknesses that led to the Constitutional Convention of 1787 and a new constitution.

In the 18th century, the word "army" meant mercenaries. Americans distrusted standing armies and were afraid they could be used to take over the country. People still remembered Oliver Cromwell and his military dictatorship in England.

Virginia was one of the first colonies to adopt a state constitution. They included the words: "a well regulated Militia, composed of the body of the people, trained to arms, is the proper, natural, and safe defence of a free State." Other states followed with similar wording in their own constitutions. Pennsylvania declared: "the people have a right to bear arms for the defence of themselves and the state; and as standing armies in the time of peace are dangerous to liberty, they ought not to be kept up; And that the military should be kept under strict subordination to, and governed by, the civil power."

In 1781 the Continental Congress approved the Articles of Confederation. This recognized that the thirteen original states had the power to govern themselves. They acted collectively to have a congress, but did not provide any money to run it. There was no president and no court system. This confederation of states proved to be a very poor form of central government.

The Constitutional Convention met in Philadelphia, Pennsylvania from May 25 to September 17, 1787. The purpose of the Convention was to revise the Articles of Confederation. But it became clear that many of its members, including James Madison and Alexander Hamilton, wanted to create a new government rather than fix the existing one. The delegates elected George Washington to preside over the Convention. They eventually agreed on agreed on Madison's Virginia Plan and began to make changes. The result was the Constitution of the United States and the present form of government.

All content from Kiddle encyclopedia articles (including the article images and facts) can be freely used under Attribution-ShareAlike license, unless stated otherwise. Cite this article:
Second Amendment to the United States Constitution Facts for Kids. Kiddle Encyclopedia.