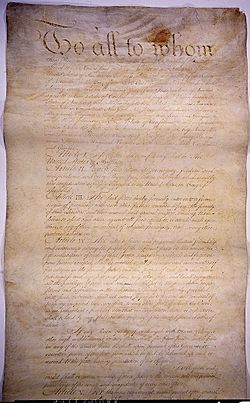 The Articles of Confederation: predecessor to the U.S. Constitution and drafted from Anti-Federalist principles

Anti-Federalism refers to a diverse group of Americans who opposed the ratification of the 1787 United States Constitution. Anti-Federalists believed a strong central government could become corrupt and tyrannical, as they believed England had become. They wanted a weak central government just as they had with the Articles of Confederation. One of the many points that the Anti-Federalists disagreed with the Federalists was that the Constitution did not have a Bill of Rights. Federalists argued the Constitution did not need a Bill of Rights, but agreed finally to add several amendments to the Constitution. The House of Representatives approved 17 amendments. The Senate passed on 12 of these for ratification by the states. Of the 12, 10 were ratified by the 13 states, becoming known as the United States Bill of Rights. Virginia was the last to ratify the amendments on December 15, 1791.

All content from Kiddle encyclopedia articles (including the article images and facts) can be freely used under Attribution-ShareAlike license, unless stated otherwise. Cite this article:
Anti-Federalism Facts for Kids. Kiddle Encyclopedia.