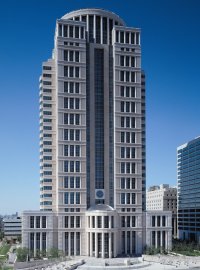 The courthouse is 29 stories tall and covers 987,775 square feet (91,767.3 m2). It is the fifth tallest habitable building in Missouri. It is located in downtown St. Louis at 111 South 10th Street. The exterior of the courthouse follows a classical tripartite scheme, a scheme that uses the split-level stacking concept. Its height is 557 feet (170 m). The construction of the building was completed in 2000. The architects involved with the building were Hellmuth, Obata & Kassabaum and EDM Incorporated. The building cost $186 million to build.

All content from Kiddle encyclopedia articles (including the article images and facts) can be freely used under Attribution-ShareAlike license, unless stated otherwise. Cite this article:
Thomas F. Eagleton United States Courthouse Facts for Kids. Kiddle Encyclopedia.