Barkley was born in Keytesville, Missouri. Her father was a lawyer. Her mother was a pianist who had studied in Europe. She married her first husband, Carleton Hadley, in 1931. She met him at Washington University in St. Louis, Missouri. He became a prominent railroad attorney. They had two daughters. He died in 1944 at the age of 42.

She married Vice President Alben Barkley, a widower, on November 18, 1949. She was his second wife, and he was her second husband. He was 71 and she was 37. Barkley's first wife Dorothy had died in 1947. Until her courtship with Barkley, Jane Rucker Hadley had been a devoted Republican. In 1940, Mrs. Hadley was working in the St. Louis office of Grand Old Party presidential nominee Wendell Willkie. When her milkman said his favorite president was Franklin Delano Roosevelt, she left a note saying, "No Willkie, no milkie". 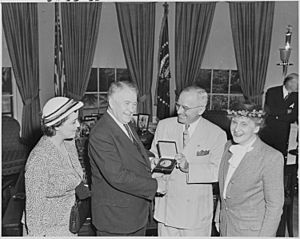 After Barkley's death, Jane Barkley started work as a secretary at George Washington University. Mrs. Barkley published a memoir in 1958 with Vanguard publishers of New York. It was called I Married the Veep. When she died in 1964 from a heart attack, she was still working at the university.

All content from Kiddle encyclopedia articles (including the article images and facts) can be freely used under Attribution-ShareAlike license, unless stated otherwise. Cite this article:
Jane Hadley Barkley Facts for Kids. Kiddle Encyclopedia.