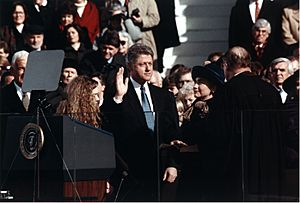 Bill Clinton was inaugurated as the 42nd President of the United States on January 20, 1993. This was the beginning of the first term of Bill Clinton as President and Al Gore as Vice President.

The ceremony took place at the United States Capitol in Washington, D.C. Clinton was the first president elected after the Cold War period. He was the first Democrat elected in 16 years.

All content from Kiddle encyclopedia articles (including the article images and facts) can be freely used under Attribution-ShareAlike license, unless stated otherwise. Cite this article:
First inauguration of Bill Clinton Facts for Kids. Kiddle Encyclopedia.