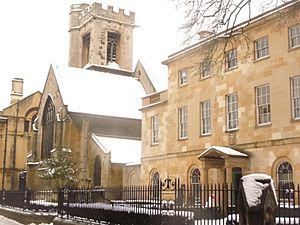 The college is located on the site of the former New Hall Inn. Its oldest buildings are Linden House (1794) and Canal House (1828). Both were former headquarters of the Oxford Canal Company.

All content from Kiddle encyclopedia articles (including the article images and facts) can be freely used under Attribution-ShareAlike license, unless stated otherwise. Cite this article:
St Peter's College, Oxford Facts for Kids. Kiddle Encyclopedia.