Brinklow Castle, known locally as the Tump, is a medieval castle in the village of Brinklow in the county of Warwickshire between Coventry and Rugby. 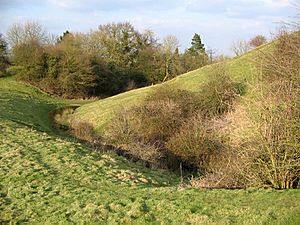 The defensive ditch surrounding the mound

Brinklow seems to have first been used as a prehistoric barrow thus the old English of hlāw in the name Brinklow which was later modified by Earl Alberic, the first Norman lord of Brinklow, but he left his Earldom in Northumbria and thus lost his lands in England before the writing of the Domesday, however his land and title had not been reassigned by the time of the Domesday recording thus there is a good record of his land holdings.

Brinklow is a motte and bailey castle of grand size: the motte is 12 m high and its original bailey was 121m wide by 152m long, later it seems that Brinklow's bailey was modified to enclose a smaller area by cutting a ditch and forming a rampart in the middle of the bailey: this seems to suggest that Brinklow slowly declined.

All content from Kiddle encyclopedia articles (including the article images and facts) can be freely used under Attribution-ShareAlike license, unless stated otherwise. Cite this article:
Brinklow Castle Facts for Kids. Kiddle Encyclopedia.