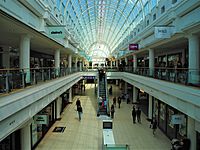 It in located in the centre of the town on the main street, The Parade. Opened in 1988 by Queen Elizabeth II at a cost of £35 million, there is a seven-storey car park adjacent to it and the town's bus stops are nearby.

The largest extension and refurbishment since it opened was in 2002 when a former outdoor court area to the north of the centre was covered over to increase indoor space at a cost of £7 million..

The centre was built on the former site of slum housing built between 1810 and 1840 by the wealthy of the town to house the poor and non-live in servants.

All content from Kiddle encyclopedia articles (including the article images and facts) can be freely used under Attribution-ShareAlike license, unless stated otherwise. Cite this article:
Royal Priors Shopping Centre Facts for Kids. Kiddle Encyclopedia.