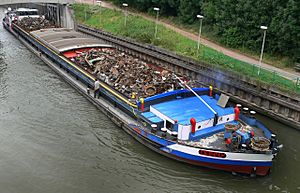 A barge is a boat with a flat bottom, mostly built to transport heavy goods along rivers and canals. Some barges cannot move on their own, and must be pushed or pulled by towboats or by horses on the towpath. A narrow barge may be called a narrowboat.

All content from Kiddle encyclopedia articles (including the article images and facts) can be freely used under Attribution-ShareAlike license, unless stated otherwise. Cite this article:
Barge Facts for Kids. Kiddle Encyclopedia.