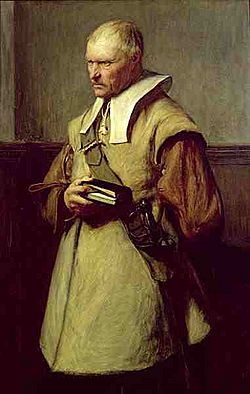 A Roundhead by John Pettie

The Roundheads were a group of people who supported Parliament & Oliver Cromwell during the English Civil War. They were also called 'Parliamentarians'. They fought against Charles I and the Cavaliers otherwise known as 'Royalists'. The Parliamentary army put their soldiers in red coats. The British army continued using red in later centuries.

All content from Kiddle encyclopedia articles (including the article images and facts) can be freely used under Attribution-ShareAlike license, unless stated otherwise. Cite this article:
Roundheads Facts for Kids. Kiddle Encyclopedia.