Kids Encyclopedia Facts
This page is about the Warwickshire Town. For the Oxfordshire Village and Civil Parish, see Coleshill, Oxfordshire.

Coleshill ( KOH-zəl) is a market town in the North Warwickshire district of Warwickshire, England, taking its name from the River Cole. It has a population of 6,481 (2011 census) and is situated 11 miles (18 km) east of Birmingham.

Coleshill is located on a ridge between the rivers Cole and Blythe which converge to the north with the River Tame. It is just to the east of the border with West Midlands county outside Birmingham. According to the 2001 census statistics it is part of the West Midlands conurbation, despite gaps of open green belt land between Coleshill and the rest of the conurbation. The green belt narrows to approximately 150 yards to the north near Water Orton, and to approximately 700 yards at the southern tip of the settlement boundary where Coleshill meets Chelmsley Wood, but is in excess of a mile wide at some points in between.

Coleshill began life in the Iron Age, before the Roman conquest of 43 AD, as the Grimstock Hill Romano-British settlement, north of the River Cole. Evidence of hut circles was found by archaeologists at the end of the 1970s. These excavations showed that throughout the Roman period there was a Romano-Celtic temple on Grimstock Hill. It had developed over the earlier Iron Age huts and had gone through at least three phases of development. The area was at the junction of two powerful Celtic Tribes – the Coritanii to the east from Leicester, and to the west the Cornovii from Viroconium Cornoviorum.

In the post Roman or Arthurian period (The Dark Ages), the nucleus of Coleshill moved about a kilometre to the south, to the top of the hill. Here the present church is set and the medieval town developed around it. By 1066 the town was a Royal Manor held by King Edward the Confessor and is recorded in the Domesday Book of 1086 as land held by William the Conqueror and the site of the court for the ancient hundred of Coleshill. Henry II granted the manor to the de Clinton family, then it passed to the de Montford's who had moated manor houses at Coleshill and Kingshurst. King Henry VII granted the lands to Simon Digby in 1496. His descendants (Wingfield-Digby) still hold the titles.

Coleshill was granted a market charter by King John in 1207, alongside Liverpool, Leek and Great Yarmouth.

Simon Digby was awarded the manor of Coleshill in 1496 by King Henry VII, following the Battle of Bosworth and the execution of Simon de Montford for helping in the attempt to oust the King.

During the era of coaching and the turnpike trusts, Coleshill became important as a major staging post on the coaching roads from London to Chester, Liverpool and Holyhead. At one point there were over twenty inns in the town. The Coleshill to Lichfield Turnpike dates from 1743. 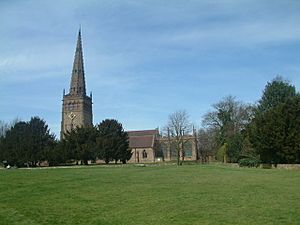 Many former coaching inns remain in Coleshill, mostly along the High Street and Coventry Road.

One of the most notable buildings in the town is the parish's Church of St Peter and St Paul at the top of the Market Square. It has a 52-metre (170 ft) high steeple, one of the finest in Warwickshire, dating from the 13th century. Inside there is a 12th-century font of Norman origin, which is one of the finest examples in the country. There are also medieval table tombs with effigies of Knights, including John de Clinton. Just outside the south door are the preserved remains of a medieval cross.

The Market Square is also the location of the town's pillory and whipping post. Historically these were used to punish drunks, and bakers who sold underweight loaves. Today though, they are one of the town's tourist attractions, having been restored and preserved by the Gascoigne family, a local family who have run businesses in Coleshill for over 100 years.

At the top of Coleshill, just past Packington Lane, is a red post box that bears the Royal Seal of Edward VIII. It is one of a small number to have been placed in the UK before his abdication. 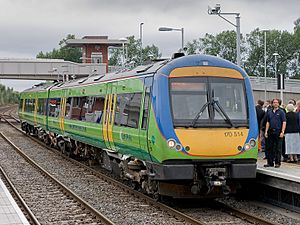 The town is close to the M6, M6 Toll and M42 motorways. It is connected to East Birmingham directly by the B4114 Road.

Until 2007, the town's nearest railway station was at Water Orton, some 2.5 miles (4.0 km) to the north-west, but a new station opened as Coleshill Parkway, adjacent to the old Forge Mills site and about 1.25 miles (2.01 km) east of Water Orton, on 19 August 2007 approximately 16 weeks behind schedule due to construction delays. It is on the Birmingham to Peterborough Line and is served half hourly by CrossCountry as part of their service between Birmingham, Nuneaton, Leicester, Peterborough, Cambridge and Stansted Airport.

A number of bus routes serve the town, including one to Birmingham, the Number 70 Route. The new railway station also has an interchange serving a direct Tamworth – Coleshill – Birmingham International Airport bus connection.

All content from Kiddle encyclopedia articles (including the article images and facts) can be freely used under Attribution-ShareAlike license, unless stated otherwise. Cite this article:
Coleshill, Warwickshire Facts for Kids. Kiddle Encyclopedia.