The Church of St. Peter and St. Paul, often referred to as Coleshill Parish Church, is a parish church of the Church of England located in Coleshill, Warwickshire. The church is a Grade I listed building.

The oldest part of the church dates back to the 14th century, but most of the rest of the church was built in the 15th century. There is a clue to a church before this with the Norman font in the church. There is evidence of a priest here as far back as 1086. Norman foundations were found here during excavations but it is not known when the first church was built at this site. Due to the wooded area that used to surround Coleshill, it is thought that before the current church began construction there must have been a church made from timber, almost certainly on the site of the current church. 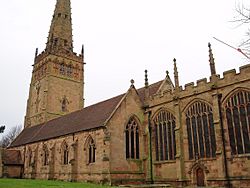 In 1961 many buildings up and down the country were listed. The church was included in this and on 8 September 1961 the Church of St. Peter and St. Paul gained the Grade I Listed status, the highest level possible. 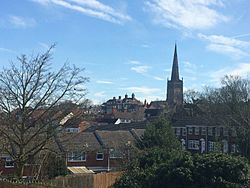 All content from Kiddle encyclopedia articles (including the article images and facts) can be freely used under Attribution-ShareAlike license, unless stated otherwise. Cite this article:
Church of St Peter and St Paul, Coleshill Facts for Kids. Kiddle Encyclopedia.