The Camel Trophy was a vehicle-oriented competition that was held every year between 1980 and 1998. It was best known for its use of Land Rover vehicles over extreme terrain.

The Camel Trophy began in 1980 as a team expedition over the Trans-Amazonian highway. Camel Trophy events since then have been informally called "the Olympics of 4×4". They were all about adventure and exploration. Over the next eight years, the expeditions crossed Sumatra, Papua New Guinea, Zaire, Brazil, Borneo, Australia, Madagascar (the first north-south crossing) and Sulawesi before returning to the Amazon. These extreme tests of human endurance brought together teams from around the world. Each team hoped they could triumph over some of the worst off-road conditions imaginable. Teamwork and mutual trust were crucial. The competition came in a series of "Special Tasks," such as winching and timed driving routes. In each case national teams competed against each other.

In the 1990s, the Camel Trophy headed to Siberia and the USSR, followed by Tanzania, Burundi, Guyana, Argentina, Paraguay, Chile (the "Road to Hell" event), Belize, Mexico, Guatemala, El Salvador, Honduras (controversially serving 500 out-of-season lobster at a dinner), Kalimantan (a thousand miles and 18 rollovers to celebrate the first crossing of the island 100 years previously) and Mongolia. The Camel Trophy however, did not simply change venue; over the years, the event evolved from a mud-plugging expedition to involve elements of adventure sport, such as kayaking, mountain biking and winter sports. Teams were selected by each competing nation in competitions held nationally, designed to test the athletic, engineering and driving prowess of potential candidates.

Although the events had an impact on the environment where they travelled, there were ways in which the Camel Trophy benefited the local society or environment. In 1993, for example, the teams worked through the night to build an environmental monitoring station in the jungle so biologists could accurately study the flora and fauna of an area. In all the events, the convoy's progress reopened roads and trails which had fallen into disuse. They frequently rebuilt bridges and repaired sections of damaged roads.

End of the Camel Trophy

In 1998 the Camel Trophy returned to Argentina and Chile for the penultimate Tierra del Fuego event. The Land Rover Freelander made its debut and was used to speed the competitors six thousand miles across the remote and snowy environment. Outdoor pursuits dominated the event. Shortly afterwards, Land Rover, a major sponsor, felt that the Camel Trophy was moving away from adventure and exploration and a news release indicated they would not sponsor future events. This ultimately led to the cancellation of the 1999 event which was planned for Peru.

In 2000 the Camel Trophy returned with a new style of event. It developed the spirit of the Tierra del Fuego event and the Camel brand but with the 32 competitors exploring Tonga and Samoa in RIB powerboats. This event was the single most successful Camel Trophy event as both a sporting activity and a Camel PR and marketing exercise. At this time the international brands of RJ Reynolds (which included Worldwide Brand Inc, the owners of the CT brand) were in the process of being sold to Japan Tobacco Inc. JTI subsequently chose to change direction and instead concentrate on the Camel Active fashion brand. It was to be the last Camel Trophy event.

The Camel Trophy originated in 1980 with three Jeep-equipped German teams exploring the Amazon. After that first event, the organisers turned to Land Rover. Over the course of the next twenty years, all of the Land Rover vehicle range were used. Range Rover, Series III, Defender, Discovery and Freelander vehicles all appeared in the distinctive "sandglow" colour scheme.

The vehicles were heavily modified by Land Rover Special Vehicles with a range of expedition, recovery and safety equipment, including: 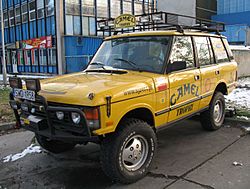 Usually the Land Rovers were only used once for one event. Some competitors purchased their vehicles and many remained in the host country. Those vehicles that returned to the UK were highly sought after as they were low mileage—but they were "Camel Trophy miles". They were stripped of most of their equipment by Land Rover before they were sold but kept the color and Camel Trophy markings.

All content from Kiddle encyclopedia articles (including the article images and facts) can be freely used under Attribution-ShareAlike license, unless stated otherwise. Cite this article:
Camel Trophy Facts for Kids. Kiddle Encyclopedia.