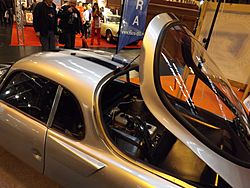 A mid-engine layout describes the location of an automobile engine between the front and rear axles. A physics term, moment of inertia, shows how hard it is to turn a moving object. In a front engine front-wheel drive car, the drive wheels also have to steer the car, causing torque steer (pull to one side during Acceleration). Front-wheel drive can cause the vehicle to oversteer (turn more sharply than the driver expects) in a corner. A front engine rear-wheel drive can have good weight distribution (balance front to rear), but has a higher moment of inertia than mid engine layout. The mid-engine layout has none of these disadvantages. It has better weight distribution and a lower moment of inertia. Its main disadvantage is that the engine, mounted in the middle, leaves much less room for passengers and cargo. However, in racing there is usually only a driver so passengers and cargo are not an issue.

All content from Kiddle encyclopedia articles (including the article images and facts) can be freely used under Attribution-ShareAlike license, unless stated otherwise. Cite this article:
Mid-engine design Facts for Kids. Kiddle Encyclopedia.