Galaxi (also Galaxy) is the common name of a series of mass-produced roller coasters manufactured primarily by Italian company S.D.C, which went bankrupt in 1993. The roller coaster design was first used in the 1970s, and as of 2009, sixteen Galaxi coasters are still in park-based operation, across the North American, European, and Australian continents, with another two "Standing But Not Operating". At least 37 amusement parks are or have previously operated Galaxi coasters; this does not include those owned by funfairs and traveling ride companies.

The Galaxi has a track length of 335 m (1,099 ft), with a ride time of 122 seconds and a maximum speed just over 50 km/h (31 mph). The track is steel. Trains consist of two four-seat cars, making 8 passengers per train. The ride is designed to be transportable, and disassembles onto seven trailers.

In the season 4 ' episode "Turn of the Screws", the subject of the main investigation is a Galaxi coaster. A sabotaged train with five passengers derailed and landed in a nearby parking lot, killing the riders and revealing the body of a park employee hidden in the trunk of a car. 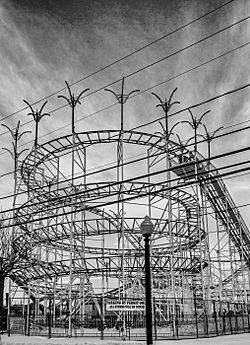 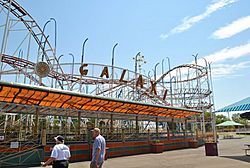 All content from Kiddle encyclopedia articles (including the article images and facts) can be freely used under Attribution-ShareAlike license, unless stated otherwise. Cite this article:
Galaxi Facts for Kids. Kiddle Encyclopedia.