Western Playland is a 30-acre (12 ha) amusement park located in Sunland Park, New Mexico. It was located in Ascarate Park in El Paso, Texas from 1960 until 2006, but after conflicts with El Paso County, owner Pat Thompson decided to move it to Sunland Park where the owner of Sunland Park Casino donated land right across from his casino. 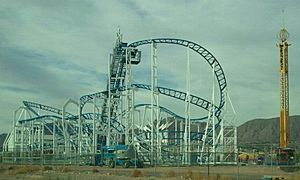 It is home to the rides the Hurricane, Tsunami, El Bandido Roller Coaster, Paratrooper, Round up, Tilt-a Whirl, Pharaoh's Fury, Scrambler, Himalaya, and more.

The park is opened seasonally, usually March to October. It opens only during the weekends for most of the season, except for summer, its peak season, when they also open during the week.

All content from Kiddle encyclopedia articles (including the article images and facts) can be freely used under Attribution-ShareAlike license, unless stated otherwise. Cite this article:
Western Playland Facts for Kids. Kiddle Encyclopedia.