Morey’s Piers & Beachfront Waterparks is a classic seaside amusement park located on The Wildwoods' boardwalk in Wildwood and North Wildwood, New Jersey. The park has been family owned and operated since 1969 and is currently run by 2nd generation Morey Brothers, Will and Jack. Morey’s Piers has more than 100 rides and attractions across its three amusement piers and two beachfront waterparks. 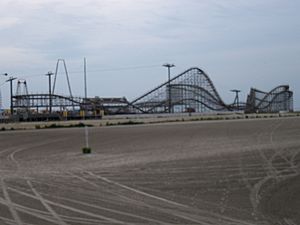 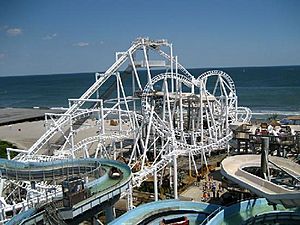 Surfside Pier is located at 26th Street in North Wildwood. It was the first of the three piers, opening in 1969 with a giant fiberglass slide that cost 25 cents to ride. The slide was closed at the end of the 2010 season and refurbished as a waterslide at the pier's water park. Surfside Pier includes the Zoom Phloom, AtmosFEAR, The Great Nor'easter, and Runaway Tram. 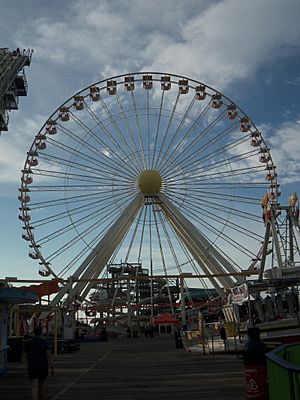 Mariner's Pier, located at Schellenger Avenue in Wildwood, is like a traditional amusement park, with classics like the Super Scooters, Teacups, Musik Express, Ignis Fatuus, Sea Serpent and the Giant Wheel, a 156-foot (47.5 m)

tall Ferris wheel built by Vekoma, which opened in 1985. In the early mornings of the summer, breakfast can be eaten on the wheel. In June 2011, 11-year-old Abiah Jones died after falling from the Giant Wheel. Since then, a "no single riders" policy was created for when guests ride the ferris wheel to ensure the safety of the guests.

Adventure Pier, located at Spencer Avenue, includes Grand Prix Raceway and the famous wooden coaster The Great White, the Skyscraper ride, a The Spring Shot ride, a Screamin' Swing, a Skycoaster, a maze, helicopter tours, and a boat tag game.

Ocean Oasis Water Park + Beach Club is on the beach behind Surfside Pier. It includes water slides, a lazy river, a hot tub with bar access and a kids area.

In 1969, Bill and Will Morey Sr. purchased two lots of boardwalk in North Wildwood at 25th and 26th streets. They called it Morey's Pier and opened that summer with a giant fiberglass slide called the Wipe Out. Guests paid 25 cents to slide down the ride in burlap sacks. 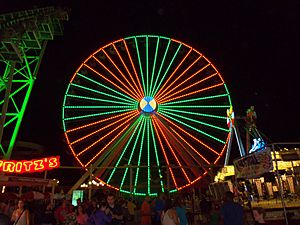 The Moreys extended their operation in 1976 when they purchased Marine Pier and renamed it Mariner’s Landing. At the time of purchase, the pier was fire-damaged and seven of the existing 12 rides on the pier had to be thrown away. However, the pier kept growing. In 1984, the Moreys purchased the Sea Serpent roller coaster.

In 1985, waterslides were installed on Mariner’s Landing and called Raging Waters waterpark. The waterpark opened a day early due to the ocean pollution. The project was masterminded by designer and architect Fred Langford. A second Raging Waters was built on Surfside Pier in 1988. This park was overhauled and relaunched as Ocean Oasis Water Park & Beach Club in 2006 and features Bonsai Beach, Endless River and various new waterslides.

Fun Pier was purchased and renamed Wild Wheels. The Morey's described it as an "interactive amusement center" with active participation by customers. This pier was later relaunched as Adventure Pier and became home to The Great White, the Skyscraper ride, a The Spring Shot ride, a Screamin' Swing, a Skycoaster, a maze, a boat tag game, batting cages, and the Grand Prix Raceway. In 2020, Morey's announced a Gateway project that includes the Removal of Boat tag, The existing Kohr Brother's Custard Stand, and The old "SkyRide" station. In the place of these structures, Multiple recycled shipping containers will be retrofitted and home to multiple new eating establishments, including a Curley's Fries and a new Kohr brothers building. No dates were given, but it is expected to be completed in 2021 or 2022

Hunt's Pier was also eventually purchased for more rides and attractions. Hunt's Pier went defunct in 1990 and was then used for maintenance, storage, and tram-car parking. The Golden Nugget remained on Hunt's Pier until 2008 when it was purchased by Knoebels' Amusement Resort and restored in their park as the Black Diamond. As of 2021, no announcements have been made to add any attractions, and the pier is instead home to various shopping and Eating establishments, a maintenance and storage facility, and a "Ripley's believe it or not" themed Mirror maze

All content from Kiddle encyclopedia articles (including the article images and facts) can be freely used under Attribution-ShareAlike license, unless stated otherwise. Cite this article:
Morey's Piers Facts for Kids. Kiddle Encyclopedia.