The Wildwoods is used as a collective term for the four communities that have "Wildwood" as part of the municipality name — the Borough of Wildwood Crest, City of Wildwood, Borough of West Wildwood and the City of North Wildwood — together with Diamond Beach, a portion of Lower Township situated on the island. The city, and the surrounding communities that share the name, derives its name from the wild flowers found in the area.

Wildwood was originally incorporated as a borough by an act of the New Jersey Legislature on May 1, 1895, from portions of Middle Township, based on the results of a referendum held the previous day. On January 1, 1912, Wildwood was incorporated as a city, replacing both Wildwood borough and Holly Beach City.

The Wildwoods began developing as a resort in the last decade of the 19th century. A building boom began in the 1950s, due partially to the construction and completion of the Garden State Parkway in 1955. 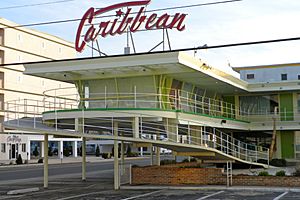 Wildwood is home to over 200 motels, built during the Doo-Wop era of the 1950s and 1960s, in an area recognized by the state of New Jersey, known as the Wildwoods Shore Resort Historic District. The term "doo-wop" was coined by Cape May's Mid-Atlantic Center For The Arts in the early 1990s to describe the unique, space-age architectural style, which is also referred to as the Googie or populuxe style.

The motels are unique in appearance, with Vegas-like neon signs and fantastic architecture. New construction in the area has seen the demolition of several motels to make room for larger condominiums. The Wildwood Doo Wop Preservation League has taken action to help save and restore these historic buildings. The Caribbean Motel in Wildwood Crest, and the Chateau Bleu Motel in North Wildwoods are both listed on the National Register of Historic Places.

A 1950s Doo Wop museum includes property from demolished motels such as neon signs and furniture. Neo-Doo Wop buildings in the area feature a neon lit Wawa and a 1950s styled Acme Supermarket. 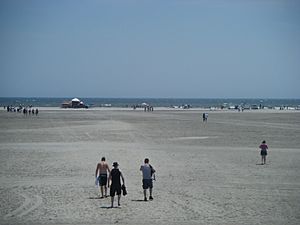 The city is located on a barrier island facing the Atlantic Ocean. On the same island are the towns of North Wildwood, Wildwood Crest and Diamond Beach, a place in Lower Township. Collectively with the town of West Wildwood (located on a separate, adjacent island), these communities form "The Wildwoods" resort. Wildwood also borders Middle Township.

Among Wildwood's Hispanic community in 2000, 69.7% were from Puerto Rico, while an additional 17.0% were from Mexico.

There were 2,333 households out of which 25.7% had children under the age of 18 living with them, 31.2% were married couples living together, 17.7% had a female householder with no husband present, and 45.4% were non-families. 38.2% of all households were made up of individuals and 14.5% had someone living alone who was 65 years of age or older. The average household size was 2.30 and the average family size was 3.06.

Route 47 (Rio Grande Avenue) has its southern terminus in Wildwood and continues into Lower Township via the George Reading Wildwood Bridge, which provides access to the Garden State Parkway. County Route 621 (New Jersey Avenue) runs for 1.3 miles (2.1 km) through the borough, from Wildwood Crest to the south to North Wildwood in the north. 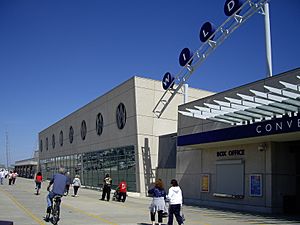 All content from Kiddle encyclopedia articles (including the article images and facts) can be freely used under Attribution-ShareAlike license, unless stated otherwise. Cite this article:
Wildwood, New Jersey Facts for Kids. Kiddle Encyclopedia.