Kids Encyclopedia Facts
Not to be confused with Middletown Township, New Jersey.

Middle Township was formed as a precinct on April 2, 1723, and was incorporated by Township Act of 1798 of the New Jersey Legislature on February 21, 1798 as one of New Jersey's initial group of 104 townships. Portions of the township have been taken to form Anglesea Borough (on June 13, 1885; now North Wildwood City), Avalon Borough (April 18, 1892), Wildwood (May 1, 1895), Stone Harbor Borough (April 3, 1914) and West Wildwood (April 21, 1920). The township's name came from its location when Cape May was split into three townships in 1723 at the same time that Lower Township and Upper Township were created. 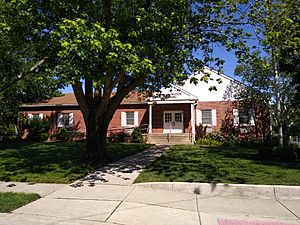 There is a private Christian K-12 school in Middle Township, Cape Christian Academy. It is in the CMCH CDP and has a CMCH postal address. Richard Degener of the Press of Atlantic City described it as being in Burleigh.

The Great American Trolley Company operates trolley service from North Wildwood and Wildwood to shopping centers in Rio Grande on Mondays through Fridays in the summer months.

Cape Regional Medical Center, located in Cape May Court House, is the only hospital in Cape May County. It was known as Burdette Tomlin Memorial Hospital until April 2007.

People who were born in, residents of, or otherwise closely associated with Middle Township include:

All content from Kiddle encyclopedia articles (including the article images and facts) can be freely used under Attribution-ShareAlike license, unless stated otherwise. Cite this article:
Middle Township, New Jersey Facts for Kids. Kiddle Encyclopedia.